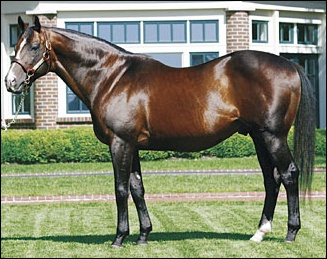 A.P. Indy was bred in Kentucky by William Farish and William Kilroy. Will Farish happens to be the owner of Lane’s End Farm; where A.P Indy was born and finished up his stallion career with a service fee that was $150 000. His service fee had once topped $300 000 when the economy was flourishing, and considering his foals averaged $550 000 at yearling sales, this was not being unreasonable.

We are fortunate in KZN to have four sons of this stallion, namely A.P. Arrow (Summerhill Stud), A.P. Answer (Clifton Stud), Mon Sang (Bush Hill Stud) and new stallion for the 2011 season, Just As Well (Spring Valley Stud). Mon Sang has already sired Country Girl from his first crop in South Africa. Country Girl has placed in Graded and Listed races with a record of 13 starts, 3 wins and 8 places, and has already earned nearly R250 000.

A.P. Indy has been described by Will Farish as ‘the perfect horse’. He was sold for a record sum, proved himself to be an outstanding racehorse, and went on to be an even better stallion. He has occupied his stable at Lanes’ End farm, deservedly so, for over 20 years. Farish described him as being an outstanding horse from the beginning, saying he was a top yearling, a wonderful racehorse and sire and now as a sire of sires. “You can certainly go a lifetime and never have a horse do what A.P. Indy has done.” 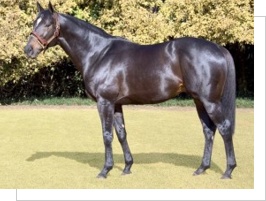 Born in 1989, he is by Seattle Slew out of the great mare, Weekend Surprise by Secretariat (Secretariat is proving himself to be a top broodmare sire, but we will delve into that another day). Weekend Surprise is no slouch herself, being a Grade 3 stakes winner of over $400,000. She is not only a half-sister to Wolfhound and Al Mufti, (who has a son standing at Scott Bros – The Sheik – pictured) but she achieved Kentucky Broodmare of the Year and has produced two classic winners (A.P. Indy and Summer Squall) and three successful sons at stud (A.P. Indy, Summer Squall and Honor Grades). She is also the dam of Tiger Ridge, who is standing in the Cape.

In his racing career, he had 11 starts, winning 8 and showing in one, earning a total of $2,979,815. He was subsequently inducted into the National Museum of Racing and Hall of Fame in 2000.

A.P. Indy was an immediate success at stud getting 13 stakes winners from his first crop of only 45 named foals. He was nominated leading sire in America for 2003 and 2006 and placed in the top ten for ten consecutive years, being in the top five seven times. He generated progeny earnings in excess of $7 million for nine straight years. By January 2008, A.P. Indy had sired five champions and 108 stakes winners of which 64 are graded stakes winners. He was pensioned from the breeding shed in 2011 after the first 25 mares of his book of 50 he covered were returned not in foal.

Interestingly, Seattle Slew and Secretariat are both Triple Crown winners, and with that sort of pedigree, it is no surprise A.P. Indy was destined to be the great stallion he turned out to be.

He seems to be following in Secretariat’s steps because, as a broodmare sire, he has produced 14 stakes’ winners and his legacy will continue. Farish of Lane’s End Farm has said he has put stamina and soundness into horses and he’s been a wonderful horse to breed speed into.

He has also proved himself not only as a Broodmare sire, but a Sire of Sires. In 2007, four of his sons ranked among the top 100 on the general sire list: Pulpit – who has proved himself at Clairborne Farm, Malibu Moon, Stephen Got Even and Golden Missile.

The Thoroughbred Times have said and it is certainly true: “A.P. Indy comes closest to being the ideal horse of the commercial breeding era.”