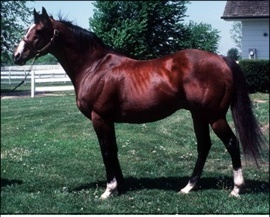 The 15.2h bay son of Nearctic out of Natalma, with a stripe that fell off to the right of his muzzle born on the 27 May 1961, was sent back to Windfields Farm from the yearling sales after not reaching his $25 000.00 reserve price; being considered too small to produce anything exceptional and out of the ordinary on the track. (A story to be paralleled by his grandson Teal – the winner of the 1995 Durban July)

Three years later, he would be crowned North America’s champion 3 year old colt, and in 1964, Canadian Horse of the Year. His wins included a scintillating win in the 1964 Kentucky Derby, setting a record time of 2:00, (which didn’t remain in place for very long thanks to Secretariat.) Two weeks later, he won the Preakness, the second leg of the Triple Crown, but sadly, it wasn’t to be, after he finished 3rd in the Belmont Stakes a fortnight later. After winning the Queen’s Plate by over 7 lengths in his native Canada, a tendon injury ended his racing $580,647, a substantial amount of money in 1964!

He was sent back to the place of his birth in Canada, Windfields Farm, to begin his career as a sire. Northern Dancer’s stud fee started at a moderate $10,000 for a live foal in 1974. Northern Dancer was inducted into American racing’s Hall of Fame in 1976. Gradually, as his progeny proved themselves on the tracks, his service fee in 1984 it was $500,000 with a no live foal guarantee! Thereafter, it was $1,000 000 (no live foal guarantee!) until he was pensioned in 1987. At the age of 20, a European syndicate made an effort to purchase him and export him back to Europe, and they offered $40 million to secure him which fell through. This was a huge risk, especially in light of his age and risk of decreasing fertility. 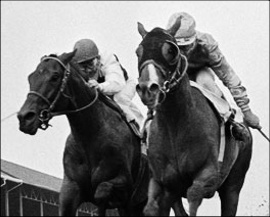 His amazing record stands over 23 seasons, he sired 635 registered foals, of which 80 % that raced, 80% were winners – a truly incredible feat.

146 of them stakes winners and 26 champions in not only the U.S. and Canada, but England, Ireland, France, and Italy. His first crops included sons such as multiple champions Nijinsky II, The Minstrel, Shareef Dancer, Try My Best, El Gran Senor, Nureyev, Storm Bird, Be My Guest, Secreto, and Sadler’s Wells. His equally fantastic daughters namely Northernette, Lauries Dancer, Broadway Dancer, Fanfreluche, and Woodstream.

His descendants, even felt in the pedigrees of the winners today of the Epsom and Irish Derbies, the Prix du Jockey-Club, the Kentucky Derby, the Breeders’ Cup races and so forth.
His influence has extended to all corners of the globe, including Argentina, Brazil, Chile, and as far as Japan, Australia, and New Zealand.
His sons have proved to be equally good broodmare sires.

Among the stallions that carried forward his prepotency, and continue to do so are:

These are only a few that we can mention, as there are so many of his descendants at stud in South Africa and Kwa-Zulu Natal.

His records at Yearling sales proved to be a spectacle, with Robert Sangster and Sheik Hamden Al Maktoum competing at sales year after year for the best stock Northern Dancer had to offer, regardless of some of his progeny’s inherited size.

His most expensive yearling sold in 1983, named Snaafi Dancer, in 1983 for 10.2$ million US Dollars, and ironically, after going into training and not being deemed fast enough to race, he it was discovered he had fertility issues after siring only 4 foals in his first season at stud.

It is estimated that 50-70% of all modern Thoroughbreds have Northern Dancer blood running through their veins, with his most successive nicks being bred to Mr Prospector mares.
Northern Dancer stood in Maryland until his retirement on April 15, 1987 at the age of 26. He was humanely destroyed on Nov. 16, 1990. He had colicked, and given a heart murmur and his advanced age – plus the possible distress of trucking him to the Veterinary Hospital for surgery was ruled out.
In his native Canada, Northern Dancer was mourned as a fallen hero. And it was to Canada that he returned one cold, rainy night, formally escorted across the border. Today, a portion of the Maryland facility where Northern Dancer reigned continues the tradition as Northview Stallion Station. And a marble slab at Canada’s Windfields Farm marks the final resting place of the little horse who danced down from the north.

His influence continues to be felt on our tracks and breeding sheds in South Africa today, and he will always be remembered as THE Sire-of-Sires of the Century. The next time you see a Thoroughbred with three white socks and a stripe down his face, remember Northern Dancer…

One thought on “The Northern Dancer Phenomenon”