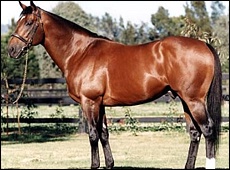 Danehill’s influence has spread far and wide around the world, and KZN is certainly one of them. We have a considerable amount of stallions carrying this formidable sire line, which include the likes of Newton(IRE) from Bush Hill Stud, Overlord(AUS) from Scott Bros, (each who have recently had their first winners), Requiem(AUS) who stands at Spring Valley Stud, Rocky Street(AUS) – (a grandson of Danehill through Rock of Gibraltar) and Spanish Harlem(USA) both hail from Middlefield Stud; with Solksjaer(USA), and Way West(AUS) both standing at Summerhill Stud respectively.

Danehill had a good start, being by leading sire Danzig out of Razyana by His Majesty and a full brother to Eagle Eyed, and two other stallions, Anziyan and Nuclear Freeze. His third dam, Spring Adieu is out of Natalma, the dam of the stallion-of-the-century, Northern Dancer. Danehill is inbred to Natalma, with her appearing in both his sire and dam line – and something many breeders say contribute to his success at stud.

Spring Adieu’s influence continued in South Africa through a son by Damascus, Damascus Gate, her daughter You’re My Lady and her grandsons Announce and Sarge, both of whom formerly resided in Kwa-Zulu Natal, and have been relocated to the Cape. Her granddaughters include the very speedy Lady Broadhurst and Daphne Donnelly; the latter among her progeny, the very useful Bouquet-Garni and Queens Bay.

Under trainer Jeremy Tree, Danehill started nine times, winning four races and finishing unplaced twice. As a three-year-old, he fought a valiant third, losing by only 1,5 lengths in the English 2000 Guineas behind Nashwan and a fourth place to Shaadi in the Irish 2000 Guineas. Danehill was switched to shorter distances and developed into a champion sprinter, winning the Cork and Orrery Stakes at Royal Ascot and the Haydock Sprint Cup, winning both races over 1200 metres. He retired with a Timeform rating of 126 and the distinction of being the Europe’s champion three-year-old of 1989.

Danehill took up his stallion duties at Coolmore Stud in Ireland in 1990, and it was in the breeding shed that he made his presence felt. Sold by his owner to the partnership of Arrowfield Stud, Australia and Ireland’s Coolmore Stud, Coolmore subsequently became his sole owner after a $24 million deal. He appealed to European breeders, and went on to become the first high-profile shuttle stallion standing the Northern hemisphere breeding season at Coolmore in Ireland, and covering at Coolmore Australia in the Southern Hemisphere breeding season. He was a sire sensation in Australia, where he went on to become leading sire 9 times after being sent back to Australia repeatedly, including spending a season at stud in Japan during 1996. 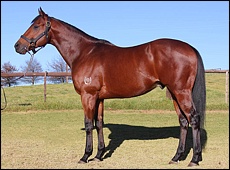 His offspring tend to be good looking and tough, which his sons are now passing down to their own progeny. Redoute’s Choice, sire of Musir, service fee topped $AUS 300 000 at one stage per mare, but has since been reduced. His sons in Europe such as Danehill Dancer and Dansili are now commanding respect from breeders and Danehill has now sired 5 Golden Slipper winners.

At the height of his magnificent career, a service to Danehill was by private negotiation, with a fee of $600,000.

On 13 May 2003, Danehill died after being hand-grazed in his paddock at the famous Coolmore Stud in Ireland, when he reared playfully and landed awkwardly, breaking a hip and bursting his aorta in the process. Having some of the world’s best veterinary practitioners on hand, it was decided there was no alternative but to put the horse down. It is believed Coolmore received £36 million from their insurance upon his death.

Click on the images to view each stallions own profile: