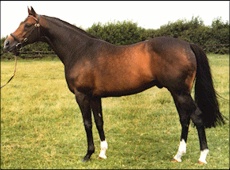 This eye catching and beautiful top class Irish bred racehorse born in 1976 happens to be the broodmare sire of the established sire Second Empire(IRE) who sadly passed away earlier in the 2011 breeding season after standing at Yellow Star Stud. Second Empire is the sire of Tropical Empire who also stands at Yellow Star Stud, as well as appearing in the female line of Newton(IRE) who has already sired a few winners – standing at Bush Hill Stud.

Ela-Mana-Mou whose name loosely translated means “I love you” in Greek, was bought for a paltry 4,500 guineas as a yearling. He was trained by Guy Harwood, and owned during his racing career by Max and Audry Muinos.

He wasn’t a very fashionably bred colt, hence his low sale price at sales, but it was at the time considered a good pedigree all the same, being by Pitcairn out of Rose Bertin by High Hat. It was a pedigree that had proved itself successful in Britain and Ireland, but the trends had begun changing when the likes of Northern Dancer had arrived and took the world by storm. 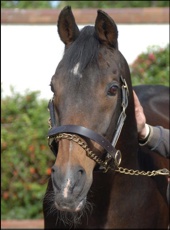 He started his racing career off with a bang, winning his debut and then winning again the following month. He was then beaten by Troy in the Lanson Champagne Stakes. After another win at Lingfield he met Troy once again, and Lyphard’s Wish in the Dante Stakes and he beat both of them three quarters of a length.
He proved he had stamina, and sent him out in Feilden Stakes at Newmarket which he then won. He was installed as favourite for the Derby, and ran a creditable 4th to Troy who romped to a dramatic victory. A fortnight later he won the King Edward VII Stakes at Royal Ascot, and then a second to Gay Mecene in the Grand Prix de Saint-Cloud in France.

He was then entered in the King George VI And Queen Elizabeth Diamond Stakes at Ascot, and ran 3rd behind Troy and Gay Mecene. He pulled up lame after the race and 3 months he still hadn’t recovered well enough, producing a poor performance in the Champion Stakes.

The owners of Troy, Sir Michael Isobell and Arnold Winstock bought Ela-Mana-Mou in partnership with Captain Tim Rogers of Arlie stud for 500,000 pounds. Once again, Ela-Mana-Mou proved what a good investment he was when they syndicated him for 3,2 million pounds a year later. 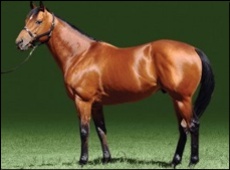 He changed trainers and was sent to Major Dick Hern. Ela-Mana-Mou won 3 times more, and his first Grade 1 victory came in the form of the Eclipse. he landed his second one three weeks later, winning the King George VI and Queen Elizabeth Diamond Stakes at Ascot by three quarters of a length from the Prix de Diane winner Mrs Penny, the pair having pulled five lengths clear of the remainder in a splendid duel which proved the courage of both horses, as well as his incredible stamina. His next aim was to be the Prix de l’Arc de Triomphe, but he was cast in his stable and it was decided to retire the honest horse and send him to stud in 1981, where he joined European champion Habitat.

His sire Petingo and his grandsire High Hat had also stood at Arlie Stud, and Ela-Mana-Mou spent the rest of his stud career there. 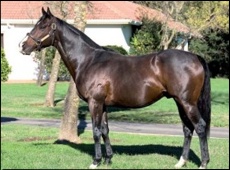 Ela-Mana-Mou turned out to be a decent stallion, and although he didn’t establish himself as a successful sire-of-sires with only a few of his sons at stud – they only sired a few winners – it has been left to his daughters to pass on his outstanding stamina, courage and soundness. It is interesting to note that he passed on the ability to produce horses that had more stamina then he had proved himself to possess at the race track.

Ela-Mana-Mou died at the ripe old age of 32, on 6 August 2008, after being found unable to get up in his paddock the decision was made to put him down.