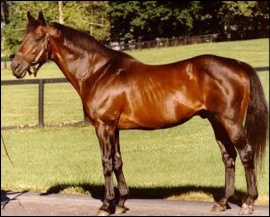 Born on 28 January 1970, Mr. Prospector has no doubt been one of the most influential sires and Sire-Of-Sires to have ever lived. By Raise a Native, he was out of the mare Gold Digger by Nashua. Sold for $200,000 as a yearling in 1971, which back then was large sum of money for a horse, he was trained by Jimmy Croll.

His race record stand at 14 starts, 7 wins, 4 seconds, and 2 thirds and he earned $112,171 in stakes, and in the process he also set two track records. Whilst he didn’t make back his yearling price in stakes, he was going to more than make up for it as a stallion.

Mr Prospector began dominating the three legs of the American Triple Crown(The Preakness, Kentucky Derby and Belmont Stakes) with his progeny, which is still ongoing through his descendants today, and he boasts an impressive list of names. His son Unbridled has gone on to achieve the same honour. He was noted for brilliant speed and he passed this as well as precocity to his offspring. 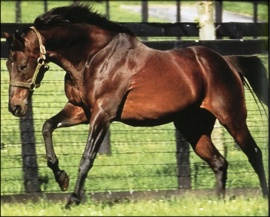 There are plenty of recognizable names mentioned there, who have gone onto stellar careers at stud.

Mr Prospector sired 1,014 foals, with more than 165 stakes winners. As a broodmare sire, by 1999 his daughters had produced 160 stakes winners themselves. Stallions in KZN out of mares by Mr Prospector include the likes of A.P. Arrow, Brave Tin Soldier and Way West who all stand at Summerhill Stud.

Other descendants include A.P. Answer at Clifton Stud, Miesque’s Approval (Scott Bros), Bankable who will be standing at Summerhill Stud for his first season this year, Modern Day (Middlefield Stud) and Mon Sang who is an eye-catching stallion at Bush Hill Stud.

Mr. Prospector had completed his 25th season at stud in 1999 and at the time of his death aged 29, he had covered 47 mares for the 1999 season, of which 31 of those mares were confirmed in foal. 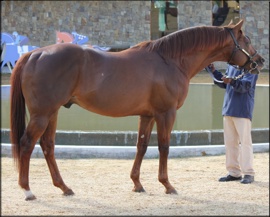 On June 1, 1999, Mr. Prospector was put down due to complications from colic, developing peritonitis, at Claiborne Farm in Kentucky. Mr. Prospector is buried in the Claiborne cemetery, fittingly between two great racehorses and stallions, Nijinsky II and Secretariat.

He nicked perfectly to Northern Dancer, and his sons and daughters are his living legacy and his influence will be felt on the breed for many generations to come.