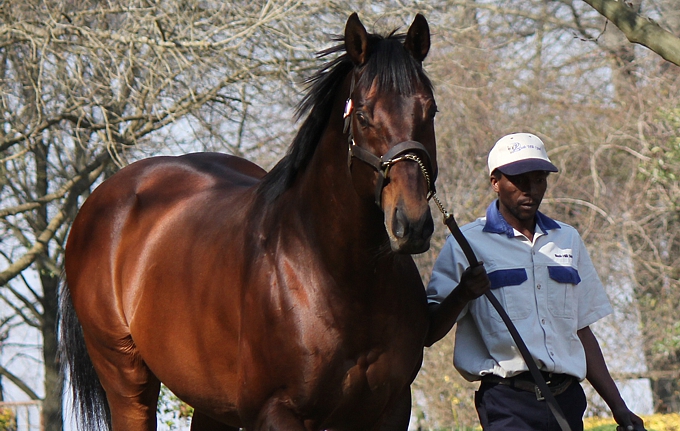 When you enter the territory of the most successful son of Machiavellian to stand in South Africa, you cannot help but be awed and almost made to feel quite inadequate by Kahal’s enormous presence.

A large dark bay with a beautiful copper sheen on his coat, Kahal stands as tall as he does over ground – an imposing 16.2 hands.

Kahal has a large handsome head carrying close similarities to his maternal grandsire Green Desert, with powerful hindquarters to match his big frame and good bone in his legs – part of what he throws to his progeny which makes them so tough and resilient, which has seen their success on the new sand tracks around South Africa.

Now 19 years old, the English-bred stallion was sent to South Africa by his breeders and owners – Shadwell Stud – beginning his career in 2001 at Summerhill Stud and recently relocating to Warwick and Karin Render’s Bush Hill Stud.

Kahal is an impressive stallion who almost seems to take the lead in everything he does, including taking his groom for a walk. He is in command of every step he takes, frequently standing tall on his hindlegs in an impressive display of athleticsm – but never coming across as aggressive.

It is merely a statement of power that Kahal has so rightly earned in the breeding paddocks of KZN, his Group winning momentum continuing in the current season headed up by Gr 1 SA Classic winner Love Struck, bred by Summerhill Stud. Out of the Rambo Dancer mare Particular Passion, Love Struck’s five wins include two Listed races as well as placing in the Gr 1 Premier’s Champion Stakes.

Kahal is out of Green Desert mare Just A Mirage (out of a Nonoalco mare), and he raced with great international success – competing successfully in England, France, America, Hong Kong and the United Arab Emirates.

At just two years of age, he won and placed second in his first three starts. He raced until six years of age – an excellent career which proved his toughness, courage and grit which he certainly passes onto his progeny. 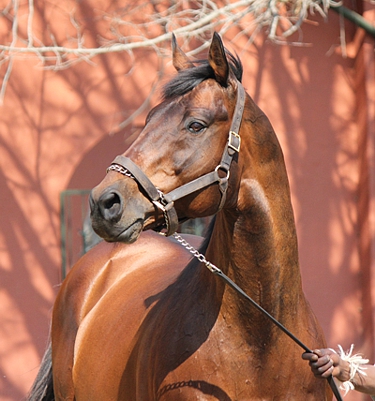 Kahal achieved an impressive race record of eight wins, five seconds and a third, earning an admirable £313,783 in Stakes. His life-time stats have seen 446 progeny to race, 271 winners (60.0%), earnings of over $9.4 million, 29 Stakes Winners and 25 Stakes Place-getters.

Warwick Render of Bush Hill Stud says of the great stallion: “Kahal has had an incredibly positive impact on the breeding industry in KZN in particular, and we as a region are most grateful to Shadwell Stud for this and all of their support of the racing and breeding industry in South Africa as a whole.”

Backworth’s Chocolicious, a talented bay mare out of Candy Box by Exclusive Patriot, won the Allan Robertson Championship Gr 1. She was recently sold to Australian interests and exported to the UK, where she is being aimed at Royal Ascot. Exciting news has broken that the mare will be booked to Frankel once her British racing season is over.

Kahal has consistently been in South Africa’s Leading five sires log by Stakes Earned for since 2009. Over the past season his Group race successes have been astonishing – his daughters have been leading in Gr 2 races around the country.

Voted as KZN Breeders Stallion Of The Year for the fourth time in 2012, seven of his progeny were nominated for awards, with four of them taking home the titles – including Vodacom Durban July runner-up Smanjemanje.

The three-year old filly set a new course record in the process with a time of 1.25.46. Less than a month later, she took home the Gr 3 Starling Stakes by half a length from the talented Blueridge Mountain(ARG), and recently stamped her authority at Greyville in the KRA Fillies Guineas Gr 2 over 1600m.

Enchanted Kingdom, bred by Bellwood Stud, out of Dancing Champ mare Aerial Dancer, immediately followed Festival Of Fire’s win early in the season by taking the Gr 3 Yellowwood Handicap from Without Malice at the Turffontein Inside track over 1800m at odds of 35/1. She has since placed closely in three Group performances. 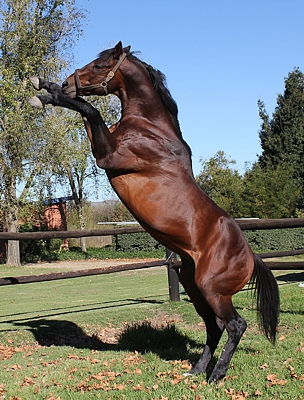 Bush Hill Stud-bred, The Mouseketeer, out of Northern Guest mare Look Sharp, is a versatile gelding who specialises on sand and is the previous winner of the Gr 2 Emerald Cup and Gr 3 August Stakes.

One of the most exciting races of the season had to be the Matekor Camellia Stakes Grade 2 which saw a brilliant finish between two of Kahal’s daughters – and full-sisters.

Incredibly, the first two past the post were not only both by Kahal, but both bred by the Kjell Foundation and both fillies ran at even weights of 59kgs, both trained by Mr Ferreira as well as both sisters being owned by Mrs L C A Bouwer. Eastern Greeting got the win over a photofinish from her sister, Kalaam. Both fillies are more proof of Kahal’s success with the Northern Dancer dam-line – being out of Salaam by Northern Guest.

The last filly to fly the flag for the day was Checcetti, winning the Bisquet Cognac Gerald Rosenberg Stakes Gr 2 over 2000m at even weights of 60kgs. Trained by Mike De Kock, the Summerhillbred Kahal filly won by over a length, with Enchanted Kingdom finishing in fourth place.

Kahal is also partly responsible for a rare white medicine hat Thoroughbred colt born in 2011 at Rathmor Stud – only one of five in the world and the first of its kind in South Africa. Named Gran Blanco, he recently changed hands at the Emperors National Yearling Sale for R220 000.

Standing for a Live Foal fee of just *R40 000 last season, South Africa is fortunate to have the services of Kahal at such a reasonable rate – his yearlings average more than five times his service fee.

*Article first published in the International Racehorse Magazine Issue #4 June 2013, therefore the stats, service fees and race results mentioned above will possibly be out of date