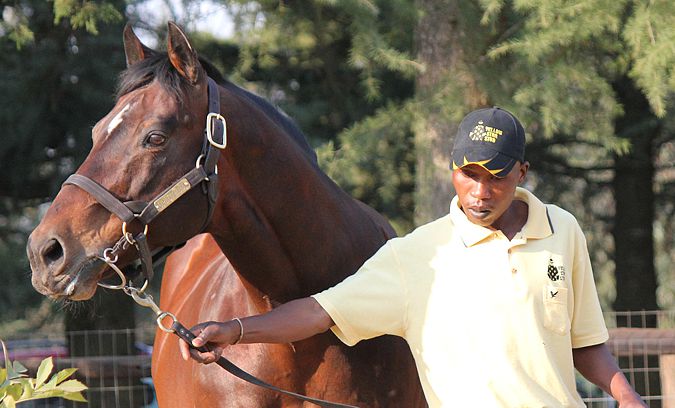 Spectrum (IRE) has proved himself a significant broodmare sire over the last few years and it is exciting times for Yellow Star Stud, where the big bay son of Rainbow Quest stands in the KZN Midlands.

A courageous grey grand-daughter of Spectrum named Moonlight Cloud came very close to changing history for the famed and unbeaten Black Caviar at Ascot last year, with Black Caviar picking up at the line to finish by a close head in the Group 1 Diamond Jubilee Stakes. This was certainly not a one-off for Spectrum.

In 2012 Spectrum finished 84th in the world as a Broodmare Sire, with the likes of Conquistador Cielo, Diesis, Elusive Quality and Night Shift lying behind him.

Born at Ballymacoll Stud, Spectrum is out of an Irish River mare named River Dancer, in turn out of a Dancer’s Image / Val De Loir mare – a stallion who is free of Northern Dancer blood.

In-bred to Native Dancer and Nasrullah, Spectrum had four wins in the UK from two to four years old over 1600m-2000m, achieving an admirable Timeform Rating of 126. He won the Horris Hill Stakes over 1600m at age two and went onto win the Gr 1 Irish 2000 Guineas over 1600m at age three.

He continued his great form with a Group 1 Champion Stakes win over 2000m and placing second in the Group 2 Prix du Prince d’Orange over 2000m. Spectrum completed his race career at age four, placing third in the Group 1 Juddmonte Lockinge Stakes over 1600m.

Imported by Highlands Farms, Spectrum is on lease to Yellow Star Stud.

Koos De Klerk who owns Yellow Star is taking full advantage of having the dual Group 1 winning stallion, sending his best mares to Spectrum and hoping they produce fillies for the future broodmare band of Yellow Star Stud in Mooi River.

Koos also commented that Yellow Star Stud received a request from a University in Kentucky for hair samples of Spectrum. “Spectrum is a wonderful acquisition for our farm and indeed for breeding in KZN, and we are thrilled to have a stallion of his breeding and achievements internationally here in the Midlands,” said Mr de Klerk.

“His temperament is brilliant – a good natured horse who covers mares easily without any quirks. Spectrum is very fertile – I think he would cover a mare in full gallop!” Koos has sent some of his best mares to Spectrum, including Americas Cup – a half-sister by Rich Man’s Gold to 2013 J&B Met Group 1 winner Martial Eagle.

Spectrum epitomises the image of the perfect thoroughbred with his commanding presence and charisma.

Standing at 16hh, his presence makes him look a lot bigger – there was a murmur from the spectators when he entered and walked around the parade ring at Yellow Star’s Stallion Day last year. Spectrum commanded the respect of every breeder present, walking with a powerful swing and athletic purpose – a stallion who clearly knows the blood running through his veins is something special. He looked as though he could have chosen to give the groom a hard time, but wouldn’t. 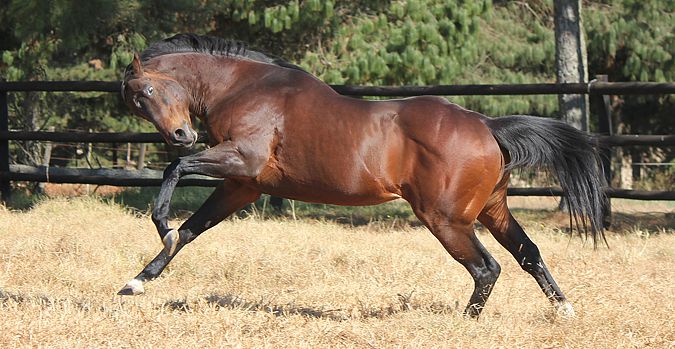 A big handsome head, intelligent eyes with a big masculine jowl, faultless conformation, substantial bone and powerful hindquarters, Spectrum carries himself remarkably well for a horse of 21, covering a respectable book of 37 mares in the 2012 season.

Yellow Star reports that his first crop of foals born this season look every part of their special sire: big and handsome – with their sire’s star in the centre of their foreheads.

A stallion that has produced Group winners of the highest calibre internationally, as a sire-of-sires, Golan (himself a winner of the English 2000 Guineas and King George VI & Queen Elizabeth Diamond Stakes), Hemingway (Australia’s leading sire in 2008 by winners to runners %) and Gr 1 winner Spectatorial who stands in New Zealand, amongst others.

However it is as a Broodmare Sire that Spectrum was logged as the second leading Broodmare Sire in Uk / Ireland by stakes earned behind the great Sadler’s Wells in 2012, producing Group winners and placed horses across the world from Ireland, America, France, Turkey, India, Norway, Australia and South Africa.

Spectrum has also produced as a broodmare sire, a young stallion in England who has caught the attention of European breeders, dual Gr 1 winning Dutch Art.

A magnificent chestnut by Medicean, Dutch Art was champion European Freshman Sire in 2011 and the UK’s leading second crop sire in 2012. Dutch Art stands for a fee of 18 000 pounds this season. He is half-brother to Up, a Galileo filly trained by Aiden O’Brien who has won the Gr 2 Blandford Stakes and less than two weeks later, the Lanwades Stud Fillies Stakes Gr 3.

He is also the Broodmare Sire of Moonlight Cloud who has been a standout in 2012. The grey filly is out of Ventura who sold for a whopping 900 000 guineas in 2011. A winner of six French Group races, three of them Gr 1 the others Gr 3, Moonlight Cloud is clearly a force to be reckoned with and her future stud prospects are exciting.

Last but certainly not least, four-time Group 1 winner in the US, Winchester, was purchased by Rosemont Stud in Australia as a future stallion prospect, making his Australian debut in the 2012 Melbourne Cup.

In South Africa, Spectrum’s Bold Black Types include winners The Plunderer, winner of the Grade 3 Champion Juvenile Cup, Sapphire Ring and Beacon Flare, who ran a very close second in Africa’s richest race on sand, the Grade Emerald Cup – to name but a few.

Standing for just R10 000 this season, Spectrum is certainly one of the best kept secrets in the Kwa-Zulu Natal Midlands – and we look forward to the great legacy he will be leaving us as a Broodmare Sire in the future.