Just As Well(USA) is a handsome new stallion standing his first season this year at Spring Valley Stud. By Sire-Of-Sires A.P. Indy out of No Matter What by Nureyev, Just As Well has all the makings to be a successful stallion based on his incredibly strong pedigree, and in addition to that he backs it up with an impressive race record.

Just As Well’s dam, No Matter What, has been no slouch on the track or the breeding shed. She achieved 3 wins over 1800m in France and the USA including the Grade 1 Del Mar Oaks, and the Listed Prix des Lilas. She earned herself a Time Form Rating of 110 and to date she has produced (besides Just As Well) 7 time winner (TFR 120) Rainbow View and 5 time winner Winter View, both Graded Stakes winners respectively. No Matter What also happens to be a half-sister to sire E Dubai, the sire of Grade 1 Breeders Cup Turf Sprint winner Desert Code (TFR 120), and Vronski (by Danzig) who is also standing at stud in the USA. 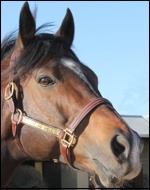 Just As Well raced over 4 seasons, and travelled extensively to race in the USA, Japan and Canada. He had 4 wins, 8 seconds and 3 thirds, and amassed $859,582 in stakes won.

He stands at 15.3 hands, and has a beautiful head which bears a strong resemblance to his famous sire, sizable hindquarters and top-line with athletic conformation combined with a good length of rein. What really stands out is his superb temperament. He was very gentlemanly in his manner and well behaved, and a stallion bit wasn’t necessary for him.

With all the above credentials, Just As Well has everything it takes to be a success at stud. He stands for a fee of R16 000 (Live Foal Guarantee).