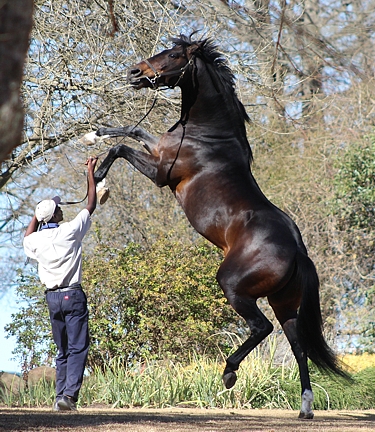 Exciting news broke last night from the CTS Book 1 sale with a South African sales record made by a top-priced Dynasty colt, Shining Knight, reaching a massive R5,2million and a Dynasty filly following for R3.7 million.

KZN, in particular Warwick and Karin Render’s Bush Hill Stud, is in the highly advantageous position of having the first foals of dual Gr1 winning Irish Flame, the first son of Dynasty retired to stud in South Africa. Irish Flame looks to carry the torch forward from his paternal grandsire Fort Wood.

Visiting the farm during the week, Irish Flame is breathtakingly beautiful – having let down into a magnificent stallion and carrying himself well after the busy covering season.

A very balanced horse who is easy on the eye, it was impressive to watch Irish Flame’s large strides covering his paddock with incredible ease and agility for a horse of his size – standing 16.2hh.

Irish Flame roams the massive green tree-lined paddock at Bush Hill Stud, with a stable that formerly housed one of SA’s top-sires, Kahal(GB).

“Irish Flame is in Kahal’s paddock because that is what we believe he will emulate,” as Warwick watches the tall dark bay stallion with a dappled coat.

Possessing all of the traits needed for a stallion to make it at stud, Irish Flame has the pedigree, the looks, the athleticism and movement, and most of all – a phenomenal race record – locally and overseas.

An Equus Horse Of The Year, Champion 3YO Colt and Champion Stayer, his sire Dynasty and broodmare sire Flaming Rock are both Equus Award winners themselves. His dam Clock The Rock stands at Bush Hill Stud and has produced a magnificent colt by Toreador this season.

Warwick goes on to make a great point regarding our local stallions going to stud. “Horses that have been born and raced in this country with great success and who have subsequently gone on to stud, have turned out to be top sires in their own right – such as Jet Master [KZN-bred], Captain Al, National Emblem and even London News amongst a few. We are very excited at the prospect of Irish Flame, who has also been well supported by the breeders and received some very good mares.”

Irish Flame foals from season 2014. Left to right: Colt out of Lady Soul, a half-sister to Tyson, and a filly out of Party Power by National Assembly. Image: Candiese Marnewick

Irish Flame’s stand out performances were winning the Grade 1 SA Derby over 2450m, not only in a show of stamina but an incredibly fast turn of foot to win by nine and half lengths from Pierre Jourdan. Irish Flame defeated Bold Silvano by a quarter of a length to win the Grade 1 Daily News 2000, only to finish second in the Vodacom Durban July behind Bold Silvano by a length. He also took home the Gr2 Gold Circle Derby and Politician Stakes.

After being sent overseas to Dubai and the UK, Irish Flame carried 60kgs in a Conditions Stake at British racetrack Kempton Park, where he set a course record in the process by a winning margin of three lengths over 2200m in a time of 136.98. The second horse named Treasury Devil by Bernardini, was carrying 54.5kgs.

Irish Flame’s first foals this season have impressed with their size, quality and superior looks of their sire. Amongst them is a filly out of National Assembly mare Party Power, and a flashy bright bay colt out of Lady Soul, a half-sister to Tyson. 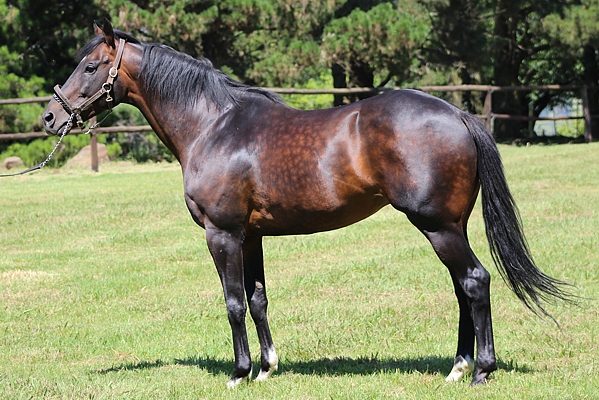 Irish Flame posing for the camera during a visit from Martin Locke and his team in the past week. Image: Candiese Marnewick

Party Power is out of a Home Guard(USA) mare Majority Rule. Naan Khataay can be found under the first dam, whilst the third dam is Gr1 Cape Of Good Hope Paddock Stakes winner Majorca. This is the family of Gr1 winner Spiced Gold, Studio Fifty Four and Equus Champion Stayer Jeppe’s Reef.

Lady Soul is by Modus Vivendi out of Sledgehammer mare Telle Belle. The half-sister to Tyson, a seven time winner in South Africa and a two-time winner in Dubai, won the Gr1 Summer Cup and the Gr3 Victory Moon Handicap. This is also the immediate family of Eternal Dancer and Magenta.

Bush Hill Stud is scheduled to be featured on Tellytrack in the near future, keep an eye on Channel 239 to view Bush Hill’s resident stallions and foals.