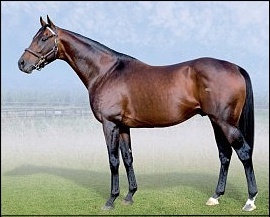 As of 15 July Badger’s Drift topped the Stallions list for 3 year olds in South Africa, with an impressive strike rate of 73% for runners to winners. Badger’s Drift was Champion Freshman sire in 2007, and his progeny are continuing to be successful at the track. Act of Supremacy and Lord Badger have both placed 3rd and 4th in the Grade 3 Champion Juvenile Cup over 1400m on 15 July 2011, and Grade 2 Winner Hospitality won another feature by 3.25 lengths Kenilworth 09 July.

His other notable progeny include Ivory Trail, winner of the Grade 1 Champions Cup over 1800m, the Gr2 Peninsula Handicap over 1800m, the Grade 3 Langerman Handicap over 1500m and the Listed Memorial Mile over 1600m. He has also produced 3 fillies with merit ratings of over 80, including Imperialist, Peonie Paradise and Golden Bow, the winner of the Listed Eastern Cape Fillies Nursery over 1200m.

Badger’s Drift himself was the second highest priced yearling at National Sales in 1999, purchased for R500 000. He went on to be a very successful racehorse, winning 7 races including three Grade 1 races, and two legs of the Triple Crown. He proved himself to be a versatile racehorse, winning over distances from 1300 – 2450m and earning himself R1.8 million in stakes in the process. He set a new course record in The Classic Grade 1 over 1800m, and he went on to win races such as the SA Derby Grade 1 over 2450m, and the Daily News 2000 Grade 1 over 2000m. 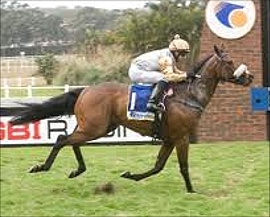 His dam, On The Roof by Thatching, has produced two 10 time winner s including Secret Hoard and Dancin’ In The Rain, and two 8 time winners with On The Tiles and Olympic Bid, as well as Arcade, a 5 time winner. She deservedly went onto win Equus Broodmare Of The Year in 2000 as a result. She is a close relative to Blushing Groom being out of a 3 parts-sister to him.

His sire Badger Land was the winner of 5 races in USA, from 1600-1800m. He made his mark on South African racetracks, siring the likes of All Will Be Well, Blossoming Fields, Wolf Whistle, Badger’s Coast, Gleaming Sky, Highland Night, Hinterland, Red Badge, American Badger and Badge of Honour, to name but a few!
Badger Land was crowned Champion Sire in 2001 and 2004. Sadly he died prematurely, but produced a mass of Grade 1 winners in just six crops that raced in South Africa.
Badger’s Drift is free of Northern Dancer blood.