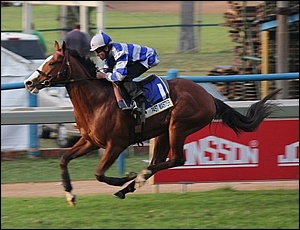 It was a beautiful crisp morning at Greyville, with Mike de Kock’s horses first in the parade ring early at 6:40am. A good crowd of people were present at Greyville this morning, all with hot coffee and sticky buns in hand.

Bravura was the first out on course in the Marcus Jooste colours. 2009 July winner, Big City Life, put in a good gallop, and it was noted that he worked with Blinkers on. The Australian-bred Igugu attracted the crowd’s attention, with everyone murmuring and moving towards the rail to get a good look at the fast filly as she flew past with Flirtation, her companion and fellow July stablemate. The Mike Bass runner, Castlethorpe, put up the fastest 400m of the morning, in a time of 22.27.

Gavin Van Zyl was giving nothing away, with both his July contender and KZN-bred hopeful The Apache (By Mogok), and Bulsara having an easy canter up the straight.

Horses that impressed were Past Master (pictured) with a big beautiful action, Run For It – whose own sire Dynasty won the July a few years back, English Garden, and Castlethorpe.

The Sangoma has predicted the winner to be English Garden, with Bravura and Safwan filling both second and third place respectively.