1 7 PAST MASTER 60.0 115 B G Schlechter Darryl Hodgson
3rd run after rest, Smashing wins in J&B Met and Drill Hall Stakes. Hit in the eye by a clod of turf in Gold Challenge so ignore that run. Longer trip for him this time.
Most impressive at Gallops and trainer confident of a big performance.

2 2 BIG CITY LIFE 59.5 112 A Fortune Glen Kotzen
Worked positively in blinkers at Gallops, but he is going to have to work hard to repeat 2009 performance.

3 11 BRAVURA 57.5 113 A Marcus Joey Ramsden
Good recent form, expect a big run. 3rd run after rest, currently on form. He is well weighted against this field and in with a shout.

4 4 PIERRE JOURDAN 57.5 110 D Whyte Gary Alexander
Ready for big effort, 3rd run after rest; Proven he is back on form and in with a serious chance.

6 16 LION IN WINTER 56.5 108 .G Hatt Joey Ramsden
A good Gallop effort but needs to overcome a poor draw, might have an outside place chance; Won Gr. 2 Peninsula Handicap and ran on strongly in the J&B Met, suggesting he will make the extra trip.

7 17 HAPPY LANDING 56.0 107 B M Yeni Joe Soma
Needs best form; Hasn’t tried this trip yet, but his pedigree suggests he will find more and go the distance (By Almufti/Badger Land) Besides last run, has been consistent. 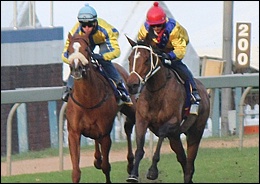 9 10 IGUGU (AUS) (pictured right along with Flirtation) 55.0 109 A Delpech Mike de Kock
Sold by Summerhill Stud, this talented 3-y-o filly and will have to prove herself here. She does have a weight for age and sex allowance which is going to give her an advantage, but she faces a big task carrying 55kg, and takes on top class colts and geldings here.

Mike De Kock pointed out that she can run from the front or come from off the pace, and appears to get better the further she goes. De Kock finds the three-year-old colts difficult to assess this year, but has no such qualms about the three-year-old fillies, especially the Triple Tiara-winning superstar Igugu.

“She ran against older fillies like Headstrong, Miss Turbulence and Alderry at weight-for-age terms in just her third career start and killed them,” he said. “In her last start she beat the Grade 1 winner Emerald Cove comfortably.” Ipi Tombe won the Woolavington hard held in her last start before the July by 2,25 lengths, while Igugu led all the way to win that same race by 2,75 lengths. De Kock is very happy with Igugu’s draw of 10.

10 14 RUN FOR IT 55.0 109 F Coetzee Justin Snaith
Lots in his favour, will be involved in placings. Strong finish when touched off by THE APACHE in The Daily News 2000. 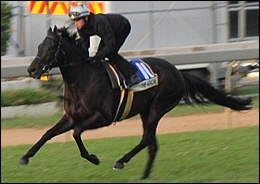 Gavin Van Zyl has the following to say about The Apache, and feels he definitely has the class to win. “His win in the Dingaans was full of merit. He then ran a good race in the KRA Guineas and his Daily News 2000 win was also full of merit. He has done nothing wrong and he will have come on with that last run.”

Van Zyl has no doubt that The Apache will stay the 2200m distance and regarded him as his best chance this year. He reckoned The Apache is definitely suited to Greyville as he had the ability to quicken and added, “Raymond (Danielson) said that he ran right to the line in the Daily News and only eventually pulled him up at about the 2200m mark.”

12 1 BULSARA 55.0 108 B B Fayd’Herbe Gavin van Zyl
Needs more improvement but needs to be respected, trying over longer, he has an advantage good draw and weight. This could be the race he has been waiting for. 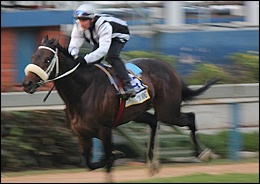 15 12 BLACK WING (pictured right) 54.0 107 I Sturgeon Paul Gadsby
By Kahal. Has done well but the July will be a big test for him, but he is in with a chance. Has an edge over THE APACHE, RUN FOR IT and ENGLISH GARDEN.

The Kahal three-year-old gelding will be ridden by Ian Sturgeon after regular jockey Sean Veale fractured a cheek bone after a fall at Scottsville last Saturday. Black Wing has won his last four starts, all at Greyville and all of them in impressive fashion. On February 1 Black Wing was entered in a Maiden at Greyville over 1600m and left the field in his wake, sauntering to a 3,75 lengths win. Gadsby was also aware that on pedigree Black Wing was looking for further.

But it was not just the style of the win that impressed. Gadsby said, “I’ve never seen a horse that goes down so well. He floats down. Garth Puller ran to me after he’d gone down that night and said, wow, you have a good horse.” “It was at that stage that Deez Dayanand said to me ‘have you noticed the times your horse is running’. I compared them to the top three-year-olds in the country and realized he must be something.” Black Wing proved not only his ability, but his courage, beating the Mike de Kock-trained four-year-old Esteco by 0,5 lengths despite giving him 3kg. This has been a constant theme of Black Wing’s wins, for although he has won off-season non-feature events, his form has always stood up very well indeed.

16 19 SAFWAN (AUS) 54.0 103 B Jacobson Mike de Kock
Might be a bit outclassed here and up in trip; Solid Greyville form but has a bad draw to overcome.

17 3 CASTLETHORPE (AUS) 53.0 108 K Teetan Mike Bass
Put up fastest performance at Gallops, very impressive. Has won since being gelded. With a good draw and weight he has a chance.

18 13 EMERALD COVE 53.0 105 R Fourie Justin Snaith
Top filly, might with Igugu on the line, and impressive gallop at Greyville.

19 8 GALILEO’S DESTINY 53.0 104 K Shea Mike de Kock
This horse could surprise, with the added talent of Kevin Shea. Weight gives him a chance for a big run here.

20 9 SUPER STORM 53.0 102 M Byleveld Mike Bass
Put in a good effort at the Gallops. Won the Cup Trial as did previous Bass-trained July winners DUNFORD and TRADEMARK. 2 wins from 3 starts since a good effort in J&B Met could suggest he has improved and is on form at the moment.