Shark Attack is proving to be an exciting prospect for his syndicate. The Sharks, along with some well-known owners such as Dr Louis Luyt, singer and songwriter, Dennis East and Emanuel Castis of Isidingo fame, will be looking forward to his race debut after a promising track appearance at Greyville on 22 March.

The Nicholas Rey Foundation was formed after Nicholas Rey had an unfortunate accident playing polo in June 2004, which left him with a severe brainstem injury, and he is unable to move or speak. He is the Patron of the foundation, and remains an avid admirer of the horse. The Nicholas Rey Foundation, founded by Ricky Smit, approached The Sharks with the prospect of getting involved in the colt to promote this excellent cause which assists people who have been permanently disabled, physically and/or neurologically, in horse riding accidents, assisting in their rehabilitation and aftercare.

His Summerhill -bred dam, Far and Away (Fahal – Civil Affair by Northern Guest) was kindly donated by Summerveld Equine Hospital to the Nicholas Rey Foundation in 2006, with the prospect of using her to raise funds for the Nicholas Rey Foundation. Negotiations began, and it was decided to send her to be bred to Casey Tibbs at Klawervlei Stud in the Western Cape. John Koster agreed to donate the service, and her trip to the Cape was sponsored by Mark and Dorrie Sham of New Turf Carriers.

As soon as Far And Away was confirmed in foal and permitted safe to travel, she was transported back to Summerveld Equine Hospital, where they agreed to keep an eye on her and ensure the bay colt arrived safely. Shark Attack was subsequently born on 23 November 2008.

A small introductory ceremony was held the Summerveld Equine Hospital, where Sharks loose-forward Keegan Daniel named the colt most appropriately Shark Attack. That afternoon, mare and foal were trucked to Greg Royden-Turner’s Roski Stud, where Shark Attack stayed until he was weaned, and once he was old enough he was sent to Ambleway to begin his pre-training with Jane Trotter. His dam was sent to the KZN mare sale, but after passing through the ring unsold, it was decided to retire her to the Zimbali Coastal Resort. 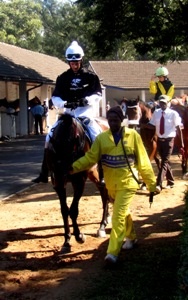 A fundraising evening held at Sibaya Casino last year saw shares being offered to the public at a once-off fee of R2000 for a 1% share. Limited shares remain available and this is an exciting prospect to get involved in, as Bart Rice has agreed to train him for free with Summerveld Equine Hospital sponsoring his medical upkeep.

It is very encouraging to see that so many different organisations and individuals have embraced this worthy cause, by donating their time and efforts for free. It has also provided an opportunity to people who might have otherwise not been involved in any form of horse ownership to follow – with more than a passing interest – the development and future career of Shark Attack, and hopefully more support and awareness towards this worthy cause.

“My initial idea to sell the remaining shares to the public at an affordable price proved to be a success in that the majority of shareholders in the syndicate have never been involved in horse racing before, which is so encouraging for the promotion of the sport,” says Ricky. “Not only have they become involved because they wanted to support the cause, but they are now exposed to our beloved sport. Hopefully more people will get involved and visit the various race courses… It is furthermore very exciting that the Sharks have come on board. I hope to have the whole team at the racecourse when Shark Attack makes his debut!”