The four-year-old Await The Dawn gelding Morning Catch caught most punters and pundits by surprise when he fought a courageous battle in the closing stages to win the R1-million Non-Black Type KZN Breeders Million Mile at Hollywoodbets Greyville in Durban on Saturday.

Out of the Jet Master mare Catch The Wind, the bay gelding under Marco van Rensburg led the annual event from the break and when challenged strongly and temporarily headed in the finish by the son of Visionaire, The Sultans Bazaar, he fought back gamely for trainer Joey Ramsden to win by what appeared to be a very short head.

The race headed the nine-race card sponsored each year by the KZN Breeders Club as a “giving back” to the supporters of the breeders in the province with the other eight races on the card each carrying a very healthy stake of R200 000. The owners of the first three horses past the post in each of the races also received a voucher towards a purchase of a KZN-bred horse at the KwaZulu-Natal Yearling Sale at Sibaya on the North Coast next week.

Favourite to win the KZN Breeders Million Mile was the Sean Tarry-trained Toreador gelding Matador Man that won the race two years ago but he failed to kick on in his usual style in the closing stages after his customary slow start but was later found on inspection to be not striding out near fore.

Morning Catch, a R200 000 purchase and bred by Mrs Vanashree and Mr Anant Singh who jointly owns him with Dr B C Arrison and Mr & Mrs D Naik, has been racing at Turffontein and the Vaal and has performed well over the mile with blinkers. He was brought down to Durban for this race and the blinkers were removed which appeared to allow him to set his gallop without doing too much early and then fight on in the finish.

Van Rensburg had him out and into the lead from the start with Unagi tracking him and Wynkelder, D’Arrivee and Forthelastime keeping close tabs on the leaders. Into the straight and Keagan de Melo moved The Sultans Bazaar quickly into a challenging position for Dean Kannemeyer and he joined issue with Morning Catch, at one stage just getting the edge. 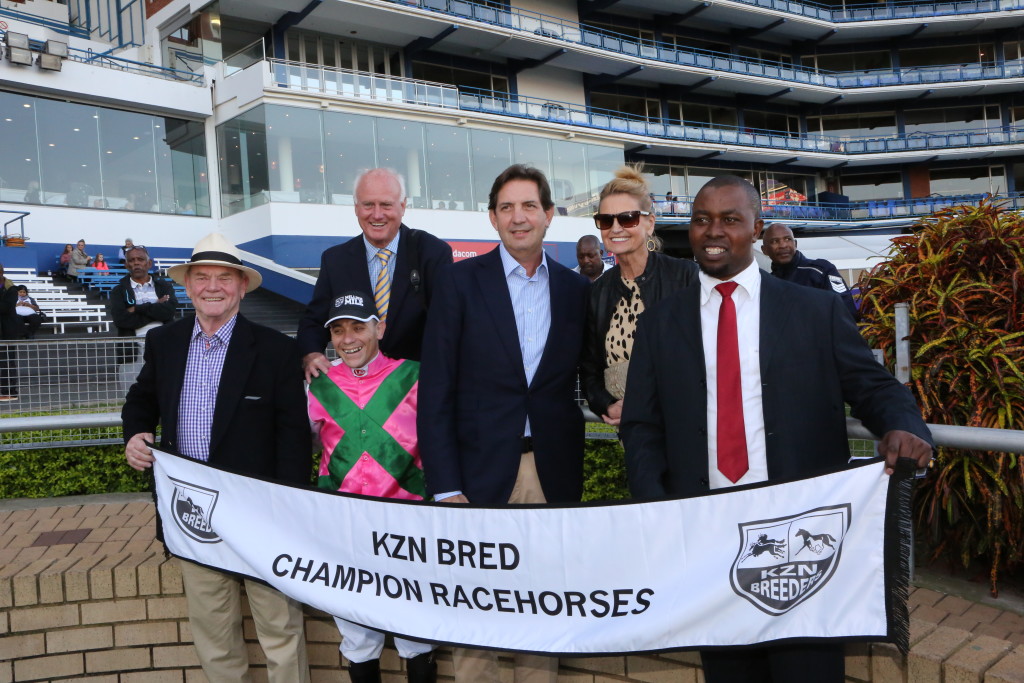 But the game four-year-old dug down deep and fought back to score the narrow victory with Wynkelder and Africa Rising filling the minor placings.

It was a great day for the breeders with the stallion honours going to former Summerhill sure Visionaire whose progeny won four of the nine races of which three were bred at the Summerhill Stud. Well done to owner Nick Jonsson who also won two races on the day, the first in partnership with Mr Crowe with Ad Altisima and the second with Caliente, both by Visionaire.

Well done to all and a big thank you to our race day sponsors who made the day an enormous success.