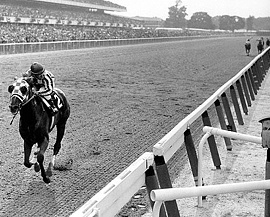 “There is a whopper” Mr Gentry announced, looking at the chestnut colt, with three white feet, lying in front of his dam, Somethingroyal – her last foal by the great Bold Ruler. It was 12:10am, 30 March 1970, a date where one of the most talented Thoroughbreds the world had ever seen had just been born.

In order to breed a foal to Bold Ruler, who at the time was the greatest stallion in America’s history, a deal had to be made with his owner, as his services were not available for sale. The prospective mare owner would approach the Phippses, Bold Ruler’s owners, with two mares. If they found the mares agreeable, they would each be bred to Bold Ruler for two seasons, or until each mare had produced two foals consecutively.

As soon as four healthy foals were born, a coin toss took place, which saw the Phippses keep the first choice of the first pair, and the second choice of the second pair. As luck would have it for the broodmare owner of Somethingroyal, Chris Chenery, he fortunately lost the coin toss, which resulted in him taking ownership of Secretariat.

Secretariat was the perfect specimen of a Thoroughbred, and many who saw him had the impression that he was almost too perfect, too good looking, with a blue blooded pedigree, to actually produce what was expected of him; simply that he was too good to be true.

Secretariat showed his talent from the instant he hit the training tracks at home. He only ran fourth in his first start after being interfered with. He won his subsequent races in style and was aimed at the American Triple crown. The Preakness turned out to be a controversial affair after it was established that the infield time and electronic timer had malfunctioned, and finally it was settled that he won the race in a time of 1:54: 2/5, the record being 1:54. Unofficial clockers had clocked the race in 1:53!

He won the first two legs of the Triple Crown with ease, and bettered Northern Dancer’s Kentucky Derby track record – a record which has yet to be broken or bettered to this day. His Belmont stakes effort was to prove to be the best-ever performance to date, and saw him feature on the covers of Time, Newsweek, and Sport Illustrated magazines. He won the race easily by an incredible 31 lengths, an effort that has never been repeated to this day and a record that remains intact, a time of 2:24.

After Chris Chenery died, his daughter Penny Tweedy took charge of his racing interests. Secretariat was syndicated for a record $190 000 a share, his syndicate comprising of 32 shares, equaling a total of $US6.08 million, making Secretariat at the time – quite literally – worth more than his weight in gold! 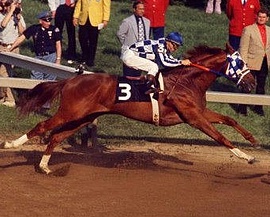 He was named Horse of the Year twice in a row, as a two and three year old.

He sired over 653 foals, and in his first crop sired Canadian Bound who was the first yearling ever sold for more than US$1 million at the 1976 Keeneland July sale. Canadian Bound exceeded this, and sold for $1.5 million. Canadian Bound was not successful at the track, and sadly Secretariat never produced any foals with his precocity and talent. However, he did sire a few major stakes winners, including 1986 Horse of the Year Lady’s Secret, 1988 Preakness and Belmont Stakes winner Risen Star, 1991 Melbourne Cup winner Kingston Rule, who broke the course record in Australia’s richest race. He sired General Assembly, who won the 1979 Travers Stakes at Saratoga and set a race record of 2:00. However, much like his sire in the Belmont, General Assembly never repeated this performance.

Secretariat was celebrated in America, receiving a visit from the Queen of England, and he was even portrayed on a postage stamp! ESPN listed him 35th of the 100 greatest athletes of the 20th century, and he was inducted into the National Museum of Racing and Hall of Fame in 1974, the year following his Triple Crown victory, inducted into the Kentucky Athletic Hall of Fame, marking the first time a horse has received this award.

He was named a runner-up to Sir Jackie Stewart in “Sportsman” of the year by Sports Illustrated in 1973, with OJ Simpson trailing behind him, the first time ever (and to this day) an animal has been honoured over a human.

Secretariat is making his name as broodmare sire, being dam sire of 1992 Horse of the Year and successful sire A.P. Indy, he is also the dam sire of the phenomenal Storm Cat through his daughter Terlingua. His other maternal grandsons include Summer Squall, Secreto, Chiefs Crown, and Dehere. He has also contributed to a dynasty in Gone West, sire of Western Winter, through his daughter Secrettame, with Giant’s Causeway being a descendant too.

Through sons of Storm Cat and A.P. Indy, we have 9 stallions in KZN with Secretariat blood, and more with Sir Gaylord, Secretariat’s half-brother out of the same dam, the appropriately named Somethingroyal. 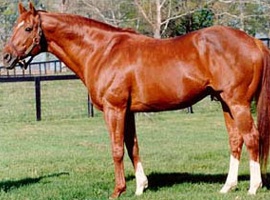 Secretariat’s genetic legacy may be a trait linked to his large heart, discovered after his death in 1989, at the age of nineteen. It was twice the size of an average horse’s heart, with all the valves and chambers being larger than normal. It is a trait that Secretariat could only pass onto his daughters. This naturally large heart can be traced to the historic racehorse Eclipse, who was autopsied after his death in 1789.

Because Eclipse’s heart appeared to be much larger than other horses, it was weighed, and found to be 6.4 kg, over twice the normal weight. It is believed Eclipse passed the trait on via his daughters, and pedigree research confirms that Secretariat traces his dam line back to a daughter of Eclipse.

Secretariat suffered from laminitis, a painful and mostly incurable hoof condition, and a regretful decision was made to end his pain and suffering in 1989. Secretariat was mourned by millions and buried at Claiborne Farm. He was buried whole; it used to be tradition that only the head, heart, and hooves of champion racehorses were buried, and he has a statue in his honour displayed at Belmont Park, and the Kentucky Horse Park. He was brought to the public’s attention again in 2010 through a movie made about him, based on a beautifully written book by the American Sports Journalist William Nack.

– The Maryland Racing Commission voted Tuesday 19 June 2012 in a special hearing at Laurel Park that 1973 Triple Crown winner Secretariat, who set records that still stand at the Kentucky Derby (gr. I) and the Belmont States (gr. I), also set the record in the Preakness Stakes (gr. I) at Pimlico 39 years ago. In a unanimous 7-0 decision, the official time of the Preakness was changed from 1:54 2/5 to 1:53. Secretariat is one of 11 Triple Crown winners. “I didn’t know if it was appropriate to cheer but I couldn’t help myself,” Penny Chenery said, Secretariat’s owner. “This is a big day!”