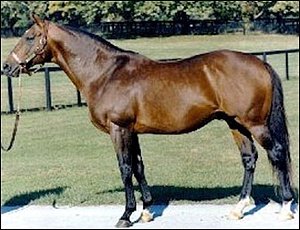 Nijinsky II, born in 1967, was a Canadian-bred, Irish-trained racehorse and sire. He was the outstanding two-year-old in Europe in 1969 when he was unbeaten in five races. In the following season he became the first horse for thirty-five years to win the English Triple Crown.

He was also historically important for establishing the international reputation of his sire Northern Dancer. Retired to stud he became the leading sire in Great Britain and Ireland and the leading broodmare sire in North America.

In KZN his influence has continued through past sires, but the two relatively new stallions on the block which have Nijinsky II in their superior pedigrees are Carpocrates(USA) (Storm Cat – Spain by Thunder Gulch) and Spanish Harlem(IRE) (Danehill – Sleepytime by Royal Academy), both standing at Middlefield Stud. Carpocrates’ first youngsters are hitting the tracks this year, with four horses starting and a place achieved already. Spanish Harlem’s first progeny will be heading to National Sales in April this year.

Nijinsky II, a bay horse with a white star and three white feet like that of his great sire Northern Dancer, was bred at E. P. Taylor’s Windfields Farm in Oshawa, Ontario, Canada. He was from the second crop of foals sired by the Northern Dancer, the winner of the 1964 Kentucky Derby who went on to become one of the most influential sires of the 20th century. His dam, Flaming Page, by Bull Page, was a highly successful racemare, winning the 1962 Queen’s Plate. At stud, she produced only two other foals, but one of these was Fleur who produced the 1977 Epsom Derby winner The Minstrel. Nijinsky was a big, powerful horse standing 16.3 hands high, resembling his dam rather than his sire in stature.

He was was offered for sale at the Windfields Farm’s annual yearling auction where he was bought for $84,000 by the American minerals magnate and industrialist Charles W. Engelhard Jr., acting on the advice of the Irish trainer Vincent O’Brien. It was Engelhard’s wife Jane who decided that the colt should be named after the dancer Vaslav Nijinsky. Nijinsky was shipped to Ireland where he was trained by O’Brien at Ballydoyle, County Tipperary.

Nijinsky gave his new trainer and owners a hard time, not eating any of the food offered to him, even after arriving in Ireland. In pure desperation the trainer sent word to Windfield’s farm and requested they send a few bags of feed over for the horse as he was losing condition daily and refused to eat the food given to him. As luck would have it, the horse feed arrived from Windfields, and the very day it arrived Nijinsky decided he was hungry enough to finally give in to his new Irish feed.

He gave his jockey’s and trainer an incredibly hard time, and it was said that he spent more time on his back legs then on all four legs, taking any opportunity to rear. His trainer said in later years, this was a show of just how well-balanced Nijinsky was, which contributed to him being the racing machine he became. 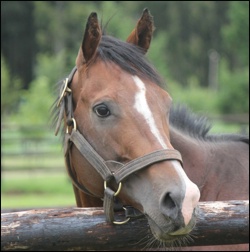 As a two year old Nijinsky’s first four races were all at the Curragh. In June he started at odds of 4/11 and won a six furlong maiden race by half a length. He followed up with easy wins in the Anglesey Stakes and the Railway Stakes. On his fourth appearance he was extended for the first time in the Beresford Stakes. He won decisively from Decies, a colt who went on to win the Irish 2000 Guineas in 1970. Having proved himself the best of the Irish two-year-olds, he was sent to England in October to contest the Dewhurst Stakes at Newmarket. Ridden for the first time by Lester Piggott he was held up at the back of the six horse field before moving through to take the lead inside the final furlong. He was an easy and impressive winner, earning himself top rating in the British Free Handicap.

On his first appearance as a three-year-old, Nijinsky won his prep race by beating Deep Run in the Gladness Stakes at the Curragh in April and was then sent back to Newmarket for the 2000 Guineas over one mile. He started the 4/7 favourite against thirteen opponents. Nijinsky took the lead two furlongs from the finish, and without being put under any pressure by Piggott, he pulled clear to win by two and a half lengths from Yellow God.

Nijinsky’s opposition in the Derby at Epsom was stronger and he started at odds of 11/8. His rivals were headed by the French-trained colt Gyr. The veteran French trainer Etienne Pollet had delayed his retirement for a year to guide Gyr, a son of his champion Sea Bird, through his three-year-old season. Nijinsky was held up by Piggott as usual before moving forward in the straight by which time Gyr was in front and moving clear. Two furlongs from the finish Piggott was forced to use his whip on Nijinsky. The favourite reponded immediately, catching Gyr in a few strides and then pulling ahead to win by two and a half lengths. The winning time of 2:34.68 was the fastest Epsom Derby since 1936. Piggott claimed that he was “always cantering” while Bill Williamson, who rode Gyr said that “Nijinsky was just too good.”

On 27 June Nijinsky followed up his Epsom win by taking the Irish Derby at the Curragh. Ridden by Liam Ward, he started at odds of 4/11 and produced impressive late acceleration to win by three lengths from Meadowville. In July, Nijinsky raced against older horses for the first time in the King George VI and Queen Elizabeth Stakes at Ascot. His five opponents included winners of major races including Blakeney (1969 Epsom Derby), Karabas (Washington, D.C. International Stakes), Crepellana (Prix de Diane) and Caliban (Coronation Cup). Without having to be extended, Nijinsky moved through to take the lead a furlong from the finish and won by two lengths from Blakeney despite being eased down to a canter in the closing stages.

In August, Nijinsky contacted ringworm, which delayed his training schedule. 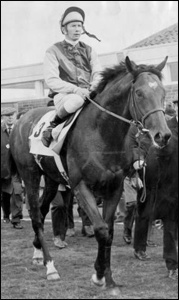 Nijinsky appeared to recover fully after being placed on a “rich” diet including raw eggs and Irish Stout, and was sent to Doncaster for the St. Leger in September. In the one mile and six furlongs race, he was attempting to become the first horse since Bahram 35 years earlier to complete the English Triple Crown. He started the 2/7 favourite and won comfortably, although his margin of victory over Meadowville was only one length.

In his next race, Nijinsky was sent to France for the Prix de l’Arc de Triomphe at Longchamp in Paris in October. Piggott produced Nijinsky in the straight to make his challenge on the wide outside and 150m from the finish he caught the front runners Miss Dan and Sassafras and took a slight lead. In the last strides however, Nijinsky appeared to veer left away from Piggott’s whip, and Sassafras, ridden by Yves Saint-Martin, produced a renewed effort to regain the advantage and win by a head. While some, felt that Piggott had given Nijinsky too much ground to make up and had left his challenge too late, the jockey responded by saying that in his opinion Nijinsky was past his peak for the year.

Less than two weeks after his defeat in the Arc, Nijinsky ran his last race in the Champion Stakes oven ten furlongs at Newmarket. Although he had been known to sweat freely before some of his previous races, Nijinsky on this occasion appeared to become particularly nervous and anxious before the start. In the race itself he ran well below his best form and was beaten a neck at odds of 4/11 by the five-year-old English horse Lorenzaccio. O’Brien on this occasion concurred with Piggott, saying that Nijinsky appeared to have “lost his fire.” Nijinsky was retired to stand at stud at Claiborne Farm near Paris, Kentucky having been syndicated in August for $5,440,000.

Nijinsky was given a rating of 138 by Timeform, the second highest for a winner of the Epsom Derby up to that time. He was Timeform’s Horse of the Year for 1970. Nijinsky was also voted British Horse of the Year by the Racecourse Association, gaining 38 of the 40 votes. In their book A Century of Champions, John Randall and Tony Morris rated Nijinsky as a “great” Derby winner and the best Irish racehorse of the 20th Century. Vincent O’Brien named Nijinsky and Sir Ivor as the best horses he had trained, placing Nijinsky first “for brilliance.”

In 1970, a film was made about his racing career entitled A Horse Called Nijinsky. Narrated by Orson Welles, it was released in British cinemas and in 1988 released on VHS video. The Nijinsky team also was voted the 1970 BBC Sports Personality of the Year Team Award. In a poll in 2000, readers of the UK newspaper The Sun voted Nijinsky their ‘Horse of the Millennium.’ Among the more unusual tributes, a Cabernet Sauvignon wine and a variety of winter wheat have been named in Nijinsky’s honour.

Having been sent to stand at stud in the United States, he was registered there as Nijinsky II, due to the fact that another American-bred stallion stood in the states named Nijinsky. 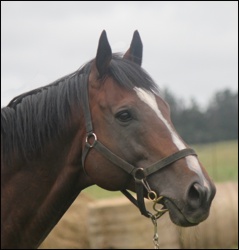 Nijinsky was euthanized in April 1992 as a result of suffering from from laminitis since 1985. He had been troubled with chronic leg problems. Walter Kaufmann, a veterinarian, had Nijinsky II destroyed after the horse experienced severe discomfort in the days leading up to his death.

His whole body, rather than the traditional head, heart and hooves, was buried in the farm’s horse cemetery between Riva Ridge and Secretariat.