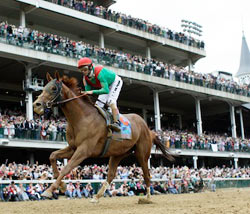 After vets examined the second set of X-rays, the injury to Kentucky Derby winner Animal Kingdom was more serious than initially diagnosed. Team Valor International president Barry Irwin said he will not race again this season.

The left hind leg injury, which quite possibly happened at start of the Belmont Stakes (gr. I), was initially diagnosed June 15 as a small fissure on the tip of the cannon bone where it joins the lower part of the hock. At the time, Irwin and trainer Graham Motion were hopeful Animal Kingdom would be able to make a return to racing in the fall. But after veterinarians re-examined him earlier this week, a more severe problem was detected.

“A second set of films has revealed a slab fracture just above the small fissure noted in the previous images,” said Irwin, who consulted veterinarians Dr. Dean Richardson and Dr. Larry Bramlage.
Irwin said the news was disappointing, but he was not surprised by it. “I didn’t believe (the initial diagnosis),” said Irwin, “and neither did Graham. He has been lame every day and it hasn’t gotten any better.”

Dr. Richardson will insert a screw to compress the fracture June 30, after which Animal Kingdom will do 90 days of rehabilitation at the Fair Hill Training Center, first in Team Valor’s own barn and then on a water treadmill at Bruce Jackson’s equine therapy unit.
Plans call for Animal Kingdom to rest for four to six weeks, after which he will walk on the water treadmill for the first 90 days. It is anticipated he will be out of work for at least three months before returning to training at Fair Hill.

Offers for Animal Kingdom have been made, however Irwin said there have been no serious talks to sell or retire him. Irwin believes the 3-year-old will still has a bright racing future ahead of him. “This is a very minor thing,” Irwin said. “We don’t even have to do surgery, but the reason to do it is because it will cut the recovery time in half. I’d like to race him at 4 and 5.”
Irwin said he would like to have him ready for the Dubai World Cup (UAE-I) in March, 2012.