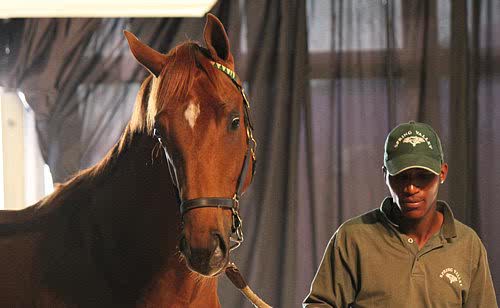 The Spring Valley Stud will be offering 11 two-year-olds (eight as agent) at the 2019 Emperors Palace National 2YO Sale, set to take place in Germiston on August 15th and 16th.

This consignment is made up of lots by such stallions as Legislate,  Mogok, Querari, The Apache, What A Winter, and Var to name but a few, with the Spring Valley draft also noteable for the quality of female line found in many pedigrees.

Recently crowned Champion Sire of 2Yos for 2018-2019, Querari, is the sire of a filly (Lot 121) whose dam is the very classy, and speedy, Tale Of The Cat mare Flame Cat,  while former dual Champion Sire of 2Yos, Var, is represented here by a colt (Lot 235) out of the Fort Wood sired G2 Gold Bowl winner Magic Smoke.

Red hot sire What A Winter, whose progeny include the likes of Clouds Unfold, Snow Report and Armando, is another top-class stallion represented. The triple Equus Champion is the sire of a colt (Lot 236) whose dam is a winning daughter of outstanding sire Dynasty and this is the family of graded winners Decorated Hero and Umngazi.

Proven G1 sire Mogok, who was recently retired from stud duties, is represented by a colt (Lot 76) whose four time winning dam is a half-sister to Merchants runner up Captain Harry, while the underrated A P Indy horse Just As Well, whose progeny include the very smart filly Just Chaos, is the sire of a colt (Lot 189) whose dual winning dam is a ¾ sister to Flamboyant Stakes winner, and Broodmare Of The Year, Trade Enquiry.

Horse OfThe Year Legislate is represented by a first crop colt (Lot 293), who is a half-brother to four winners including the stakes placed Cotton Candy, and this colt is bred on similar lines to the high-class galloper Dynastic Power.

Giant’s Causeway’s son Eightfold Path has three in this draft including a filly (Lot 298) whose G3 winning dam is a full-sister to G1 Empress Club Stakes winner Legality, and a colt (Lot 355) whose granddam is a Rainbow Quest half-sister to Irish St Leger winner Strategic Choice.

Other appealing lots include the Crusade filly (Lot 313) from the family of top fillies Love Is In The Air, Rootin’ Tootin’ and Sylvan On Fire (this filly being a half-sister to a dual Kenyan classic winner), and a filly (Lot 360) by promising sire, and Equus Champion, The Apache (a former National 2YO Sale graduate) who is from the same family as The Apache himself!

The online catalogue for this year’s National 2YO Sale can be viewed at www.bsa.co.za