Athandiwe Mgudlwa rode Royal Agree in the first leg of the KZN Breeders “Level The Playing Fields” Series for a total stake of R1million over four legs, and won on the well-bred Mogok filly for owner Peter De Beyer and trainer Glen Kotzen.

The “Level The Playing Fields” Series is just that – jockeys are drawn out of a hat for each leg and are assigned points by how they finish in each of the races – never knowing who they are going to ride. The overall winner will take home R50 000, along with the winning trainer, owner and breeder with most points accumulated. Each race runs for a stake for R100 000, with the final leg for R200 000 on the Greyville turf, 25 June.

We caught up with Athandiwe, who has earned over R1,5million in stakes for the connections of horses he has ridden this season.

“I live in Hillcrest, but my family is all based in Johannesburg.  As a young child growing up in the rural areas, there were always horses around me and I didnt know that it was something that I could do as a career – and when the opportunity presented itself I really liked it. I didn’t think this sort of job was a possibility really; my one teacher at my old school, Mr Mkize, told me about it and I thought it was worth a try and it ended up being a passion.”

“This is my sixth year as a fully qualified jockey.” When asked how many winners he has ridden, Athandiwe gives a quiet chuckle, saying that he has stopped counting his winners but when he graduated from the [South African] Jockey Academy, he had 50 winners under his belt.

“I just love the feeling of working with the horses, and all the more rewarding when I am putting a smile on an owners face after I have won for them. Owners plough serious money into the business of racing horses and I am really happy when it works out.”

What are the some of the challenges faced these days by jockeys these days?  Athandiwe answers the question put forward. “Putting the work into the horses in the mornings and going out to race days and winning on them – seeing the joy of the connections, is a great feeling.

The challenges of my job is that there are a lot of jockeys around which makes it a very competitive job.  There are a lot of jockeys around with plenty of experience and I have to work that much harder to be competitive. It can be tough if you arent getting the opportunities. In this line of work you have to work hard, be ambitious and keep at it.”

Weight can be a serious issue for most jockeys which makes the job all the more of a challenge, balancing the strength to ride feisty racehorses in an entire race card and keeping weight off is no easy ask for any professional sportsman.

“I am very fortunate indeed in that I dont have a battle with my weight. I have taught myself since the academy days not to fall into bad habits. Sometimes it isnt always advantageous to be light when the trainers have to add weights, it can be a bit of a challenge to, riding with deadweight.”

Discussing career highlights, Athandiwe says the Markus Jooste owned son of Var, Normanz, provided him with his first Gr1 victory. After defeating sprinting greats Barbosa and Tevez in the In Full Flight Listed Handicap, he got the Gr1 ride at Scottsville where the combination beat the brilliant Jooste-owned Red Ray by one and half lengths in the famous green, black and yellow star colours in the Golden Horse Sprint.

“I was really lucky that my first ride in a Gr1 was a winner!” Athandiwe describes another career highlight when securing four wins in a race day. “One of the proudest moments of my life has been riding the Jackpot which was a quite a big highlight.” The Jackpot consisted of riding and winning on four horses in a row on a raceday, an outstanding feat indeed – amongst them Modern Express, Wooden Gold, First Sovereign and Gortahawk.

As far as special horses go, Athandiwe describes Gr1 Premiers Champions Stakes winner Kochka, as “probably the best I have ever ridden. Its such a pity he couldnt carry on as he had problems with his legs, even after a rest.”

Is there life besides racing? “I used to play a lot of soccer until I got injured in racing – I injured my knee. That will always be my hobby. Im a big Chelsea fan, following the English Premier League. Locally I support the Kaizer Chiefs but I havent been following them much lately,” he smiles.

“My mentor is Garth Puller, and I am so grateful for his support he has showed me along the way and helped me get where I am today. When it comes to race riding support, Alyson Wright is giving me great support – Im getting my rides from most of them, and then Sean Tarry has always supported me and trainer Charles Laird.”

Athandiwe’s thoughts on the the series? “The Level The Playing Fields Series is a very good concept from Gold Circle and KZN Breeders. Its very different, its very motivating as a jockey and for the trainers and owners. We are on equal sides and not getting to pick rides and possibly get an opportunity on a better horse and gives us an equal chance and provides a comparison as well,” he enthuses.

“It has also opened opportunities for the jocks as well – you are getting to ride horses for trainers that you wouldnt usually get the opportunity or ridden for before, and of course these opportunities can boost your career. I was lucky enough to be drawn on Royal Agree in the first round and win – before that I had really ridden for the stable of Glen Kotzen. This has given some the jocks a great chance and we all need chances in life.”

Athandiwe competes in the first of two pools of the second Leg on Sunday 30 April at Scottsville, this time on Alyson Wright’s 3yo filly, Roy Is Second. Bred and owned by Roy Moodley, the KZN-bred filly is a daughter of Horse Chestnut out of a Western Winter mare, and is a winner (over 1400m) and placed seven times.

“She has been very consistent in her career and I think the 1400m will suit her better. She’s definitely in with a shout if all goes well!” 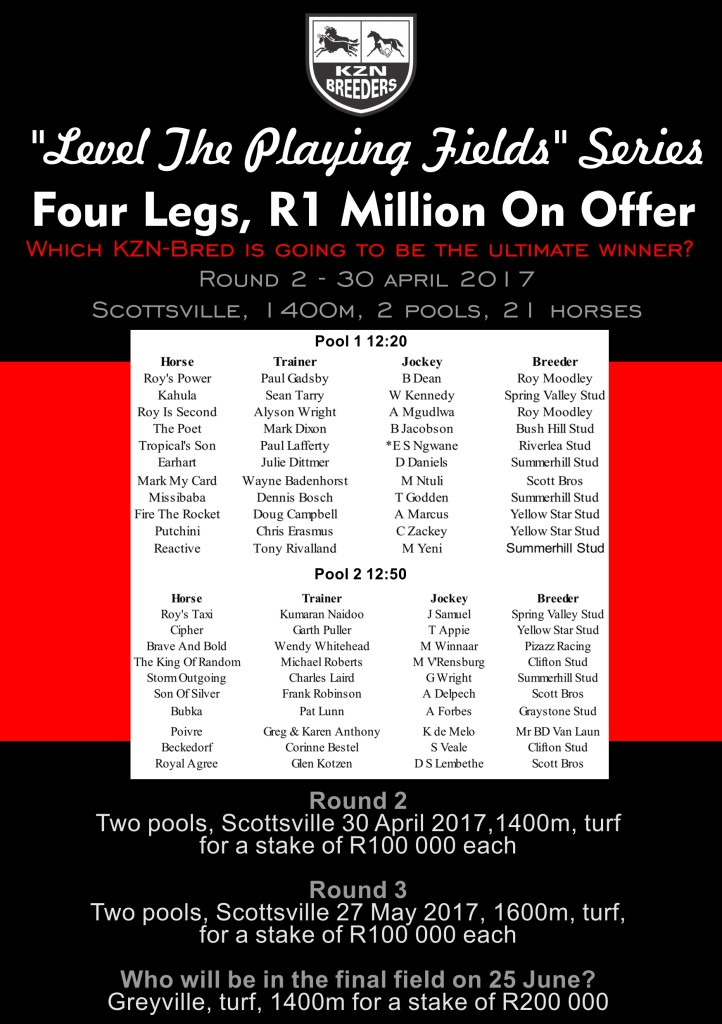