Varsfontein Studs Judpot has been grabbing headlines around the country recently, thanks in part to his phenomenal achievement of producing two Grade One winners (Forest Indigo and Along Came Polly), a Grade 2 winner (Colour Of Courage) as well as a Listed Stakes winner in Juddering Angel from only his first juvenile crop at stud. Many people might not realise though that Judpot has a KZN connection, through his dam the legendary Miesque, who was the granddam of the top class Scott Brothers stallion Miesque’s Approval.

Miesque was arguably one of the greatest racemares of all time, and was the first horse to win back-to-back Breeders Cups and racing awards in both Europe and America. A brilliant filly and multiple Group One winner at 2, she went onto a stellar racing career with a total of 10 Group One victories to her name before retiring to the Niarchos farm in Kentucky in 1988. It didn’t take the daughter of Nureyev long to show just how successful she was at passing on brilliance to her progeny, in all, she produced five Stakes winners, two Classic winners and a Breeders’s Cup sire. 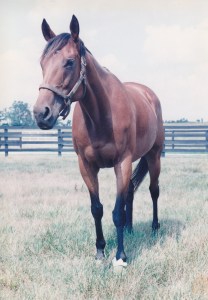 Her first foal was an imposing bay colt named Kingmambo, who went onto to achieve three Group One wins (Poule d’Essai des Poulains, the St. James’s Palace Stakes and the Prix du Moulin de Longchamp) at only 3 years of age. Retired at the young age of 4 to stud, he quickly went onto to become one of his great sires Mr Prospector’s leading sons at stud, producing the likes of: 1999 Belmont Stakes winner Lemon Drop Kid (himself at top class sire, multiple Group One winner, Henrythenavigator (who has sired the brilliant George Vancouver, winner of the Breeder’s Cup Juvenile turf), King’s Best (sire of Epsom Derby and Arc winner Workforce), and top Japanese sire King Kamehameha, who in turn sired 56 Stakes performers, 20 Group winners, 10 Listed winners during his career at stud in the Land of the Rising Sun.

Pensioned in 2010 due to recurrent neck problems, Kingmambo sired over 90 Stakes and Group winners, who in turn earned nearly $100 million in winnings. Today the 23 year old super sire lives out his days quietly at Lane’s End Farm in Kentucky, where he stood for his entire stud career.

It was through her third foal that bears the KZN connection: Miesque’s Son, a full brother to Kingmambo, and multiple Group placed and Group 3 winner (Prix de Ris-Orangis) and second in both the Prix Maurice de Gheest and Prix de la Foret (both Group One). It was in the breeding shed that Miesque’s Son was to achieve his true greatness, through a fortuitous mating with a 2 time US-winning Win Approval, a daughter of the great Canadian Triple Crown and Hall of Famer, With Approval.

The resultant colt, Miesque’s Approval proved to be one of the best advertisements ever for the great mare; not only was he a multiple Group One and Group winner, but he was crowned Eclipse Champion Turf Horse of 2006, and continued winning major Group races, including the notoriously tough Breeders Cup Mile when he was 7 years of age. Retired to stud soon after, it was something of a coup for South African, and in particular KZN, when he was bought by the KZN Breeders Club for stud duties in the province. What made his acquisition so unique was that, here was a multiple Group One winner fresh off the track, who had not stood anywhere else, and achieved minimal success with his progeny. 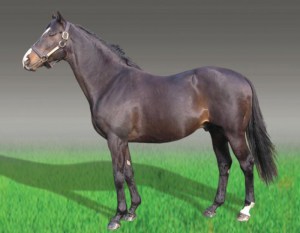 Sent to Robin & Joyce Scott’s famous Highdown Stud in the Natal Midlands, Miesque’s Approval had big shoes to fill, the stud had bred some of the country’s greatest horses, Politician and Devon Air. In the same battling mould as his great granddam, Mieseque didn’t disappoint the faith placed in him, and managed to get 24 winners from his first crop alone, among them Top of the Chocs (Listed winner), and Don’t Tell Mama (Group 3 placed), showing that famous family precocity that has stood Judpot in such good stead in his own career. One of Mieseque’s biggest standouts has been the talented Eton Square, winner of the 2012 Jubilee Handicap (Grade 3) and 4th placed in the Vodacom July in the space of a few weeks. Along with the ultra-consistent Placido and Putney Flyer, both of whom have several wins under their belts, Miesque has shown that his brilliance is no mere flash in the pan. Like a good wine, Miesque’s Approval is getting better with age, and there is much to look forward to with as we see his upcoming crops hit the track.

In 2011, his grand dam, the iconic Miesque was put down at 27, due to the infirmities of old age, and the world mourned the passing of one of the great mares of the modern age. One just has to look at the footage of her many famous victories on the track, to appreciate her sheer grace and presence. Thankfully for us, she was able to pass her brilliance and sheer class onto her innumerable progeny throughout the world, both as a broodmare and grand dam. KZN breeding and racing has indeed been the fortunate beneficiary of one of the greatest female lines in the world today. Long live the Miesque dynasty!