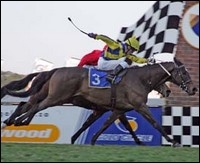 The Bloodstock South Africa/TBA National Two Year Old sale took place over the past weekend on Friday and Sunday and by all accounts, was a very successful sale for the TBA.

The top-priced KZN-bred colt came from Scott Bros, Lot 12 named Galactic by Miesque’s Approval. He is out of Markanawa(NZ) by Maroof(USA) and is a half-brother to Oaks Trial Listed winner Markofdistinction (by Mogok), a three-time winner. The mare also produced a 6-time winner in Australia by Tale Of The Cat(USA). Markanawa is a full-sister to Equus Champion Female Sprinter Toccata, as well as champion stayer Long Dollar, Polar Bound and New Zealand champion filly The Lions Roar. The colt sold for R300 000 on the first day to top vendor Mr L Wernars.

Lot 360 from Bush Hill Stud was the top-priced KZN-bred filly, by Tiger Ridge out of Kentucky Lass by Kentucky Slew, named Ronda and sold for R210 000 to Brooks Racing CC. The dam Kentucky Lass is a seven-time winner, and has produced seven-time winner and Gr 1 Champions Cup winner African Appeal and six-time multiple Stakes placed Mary-Lou (by Rich Man’s Gold). Kentucky Lass has bred eight winners in total. This is the family of Well Dressed, Fashion Maker, Best Dressed and Divine Heights.

The best performer of KZN’s young sires at the sale was that of A.P. Arrow – a colt named Bow ‘n Arrow bred and consigned by Barton Hall Stud was sold for R150 000 to Andre Vorster. The bay colt is a 4th produce out of mare Apple Valley by Val De Bois(FR). The mare has produced one runner and one winner, named Super Red, this is the family of the likes of Jessamine (dam of The Sheik, Al Nitak and Shoe Express) as well as The Mouseketeer, Red Flyer and Art de Vivre.

The top buyer of the sale was Mr L Wernars, who purchased eight lots for R1 615 000 at an average of R201 875 each. Miesque’s Approval was the top-performing KZN represented stallion, selling 10 Lots for an average of R107 500 each.

View the complete results at the TBA by following the link.