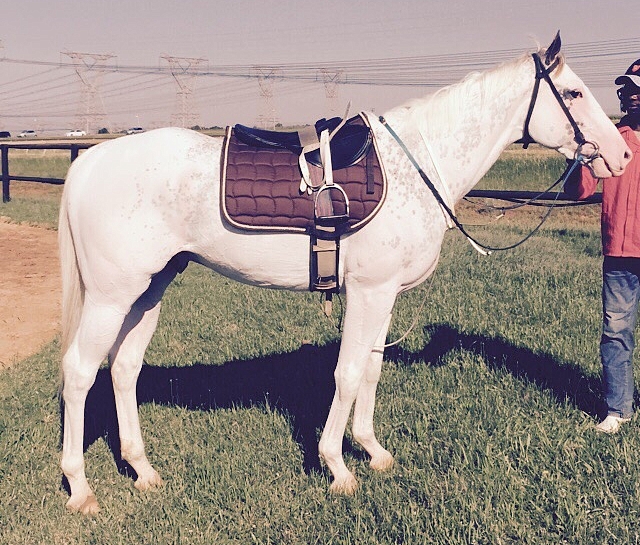 One of the world’s rarest Thoroughbreds, KZN-born Gran Blanco is scheduled to have his first start on the track in Gauteng soon, under the care of trainer Robbie Sage.

Bred by Mike and Tanya McHardy of Rathmor Stud, the three year old white medicine hat colt by Kahal, was recently purchased by Mike’s sister Jeanette McHardy who will be racing him.

A competitive rider, Gran Blanco will remain with Jeanette after his racing career to pursue a new avenue in showjumping, a discipline the progeny of Kahal compete in at the highest level and excel, post racing.

Gran Blanco’s full-sister named Shandy is a plain bay yearling, who has been put forward for inspection to enter the 2015 National Yearling Sale.

A colt who drew world-wide attention, being only one of five or so in the world, Gran Blanco sold at the 2013 Emperors Palace National Yearling Sale for R220 000.

His dam Perakeen is by Rakeen, herself a 5-time winner and placing twice in the Gr 3 Yellowwood Handicap Stakes, as well as two Listed races of distances between 1300 – 1600m.

Rakeen of course is the sire of South Africa’s recent champion stallion Jet Master. The first four dams in this pedigree are all Group placed mares in South Africa, Australia and New Zealand. Second dam Perfick(NZ) is a 6-time winner who placed in the Gr 2 Concor Technicrete Spring Handicap and two Listed races. She has produced three winners with over 12 wins achieved between them.

Third dam Royal Acclaim (AUS) placed third in the Gr 1 South Australian Oaks and she has produced four winners, all of which have achieved Black Type.

His dam Perakeen has a filly by Gr1 Middle Park Stakes winner, Crusade, at foot this year. She is currently not in foal.

We look forward to seeing Gran Blanco on the track for his first race!

To follow the news from Gran Blanco’s birth, visit the following link.