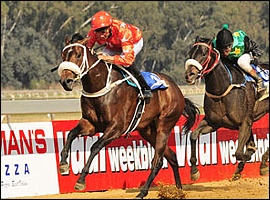 The annual KZN Mixed Sale takes place at Yellow Star Stud in Mooi River on Thursday, 12 July, and will start at 12pm. The sale consists of broodmares, weanlings, fillies coming off the track for stud, two year olds and horses in training.

This will be buyers’ first opportunity to purchase weanlings by first season sires’ A.P. Answer(USA) and Fort Beluga. Both these stallions’ progeny have attracted attention on farms since birth. Unfortunately Fort Beluga died prematurely and this will be his only crop available so take advantage.

Broodmares being offered for sale include mares that are carrying first crop foals by Just As Well(USA), Bankable(GB) and King’s Chapel(AUS).

A few of the mares on offer include a full sister to Cover Look, Lot 1 named Hackness, she is carrying a foal by Admire Main and is being consigned by Summerhill Sales. There is also Lot 14, Model K, the dam of Mannequin being offered by Summerhill Sales. She is carrying a foal to Kahal therefore it will be a full-sibling to 11-time Listed winner Mannequin. Lot 44 from Invermooi Stud is a half-sister to Sugar Rush and new stallion prospect at Invermooi, Meet At Malamala. She is by Personal Hope and in foal to A.P. Answer.

Weanlings on offer include Spring Valley Stud, acting as agent for Mr P. du Toit, have Lot 91 on offer, a colt by Trippi out of Lower House(USA) by Deputy Minister. The colt is a half-brother to Feline Prince, a 3-time winner in Zimbabwe. 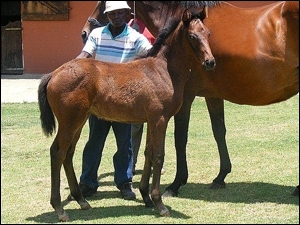 Lot 94 from Invermooi Stud is a an A.P. Answer chestnut colt – a half-brother to Winter Mischief (Listed Placed winner by Western Winter) and Uptown Girl, who placed in the Gr 3 Three Troikas Stakes. The second dam is Nobely Known – the dam of Angus and Dignify.

The next is a Badger’s Drift colt, Lot 123 out of the mare Dash Of Daylight – who happens to be a half-sister to mulitiple champion sire Jet Master. The dam has two previously unraced fillies by Slew The Red.

Another that catches the eye is from Bush Hill Stud (photo right – taken as a foal 1 December 2011), Lot 127. A filly is being offered by Mullins Bay out of Elation by Badger Land. Elation was herself a 5-time winner, and she has a 100% record at stud with 5 foals, 5 runners and 5 winners – with 10 wins between her progeny. This is the family of sires Bush Telegraph (sire of London News) and Lords(SNL).

Alec Hogg of Graceland Farm has announced that he will be selling his farm. His mares and foals are late additions to the sale and they don’t appear in the published catalogue however they are available to view on www.tba.co.za., be on the lookout for them. Alec had established a small elite band of broodmares with mouthwatering pedigrees and top class stallions. His weanlings on offer include an outstanding Kahal colt named Roubini. He will be worth looking for.

The sale will progress as follows:

Keep a watch on our Facebook Page, KZN Breeders, for updates of the top-sellers throughout the sale. View the catalogue online at the www.tba.co.za.