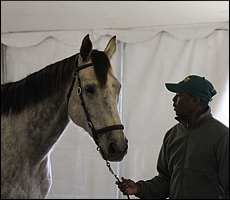 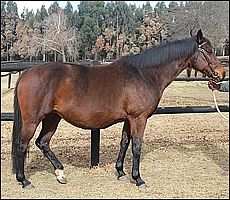 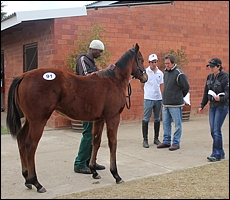 The beautiful grounds of Yellow Star Stud in Mooi River played host once again this year to the KZN Mixed Sale, where broodmares, weanlings, two year olds, fillies for stud and horses-in-training were offered.

The day kicked with off with a big start. Lot 1 from Summerhill Sales, a large grey mare named Hackness, an own sister to Cover Look sold for R180 000 to Winston Chow. She is in foal to Admire Main(JPN) and her Muhtafal weanling was offered later in the session.

The next mare to draw a lot of attention and was the sale-topping broodmare was the diminutive Model K – the dam of 11-time Listed winning Mannequin (by Kahal). As it happens, Model K is once again in foal to Kahal. Model K is by Model Man out of Kal Sufi by Al Mufti. She sold to L. Werner for R280 000. She was consigned by Summerhill Sales.

The highest price achieved for the Fillies offered for stud was Hadlow’s Jet Master filly named Final Approach. A big bay that stands over ground, she is a two-time winner including placing in the Final Fling Gr 3 Stakes, she is a half-sister to Road To Reason. Final Approach is out of a mare named Treasure Teft by Gold Mark. This is the family of First Lisa, Counter Action and Perfect Order. She was sold for R110 000 to Highlands Farms Stud.

The top-priced weanling was for a Trippi colt out of the American mare Lower House by Deputy Minister. His second dam is Squeak(GB) whose wins include the Gr 1 Matriarch Stakes. Consigned by Spring Valley Stud on behalf of P. du Toit, there was a lot of interest in this weanling. The dam has produced one runner and a winner by Tiger Ridge in Zimbabwe. The mare has an unraced two year old colt by Kahal named Housecarl. 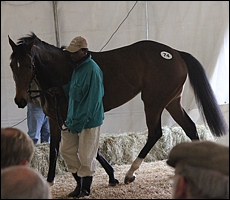 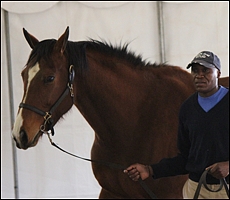 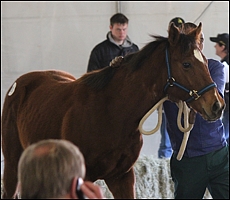 The top-priced horse-in-training sold for R25 000, and eye-catching filly named Artistically Done consigned by Spring Valley Stud on behalf of P. du Toit, released by Doug Campbell. She is a two-time winner and has placed 9 times. The filly is by National Emblem out of Rapelle by Elliodor. She recently finished 4 lengths off Upity Ann on Vodacom Durban July day. Her dam-line includes the likes of sire War Lord and UK-bound Dancewiththedevil.

The top-selling Two year olds were both by Slew The Red, consigned by Invermooi Stud. They each sold for R15 000, Lot 84 named Spirit Of Spring out of Sonnet by Personal Hope sold to R. Adamson. This filly is related to Imbongi, Spring Garland, Victory Moon, Kelly and Oracle News. Lot 86 Chase The Cherry sold to Des Egdes, the filly out of Call Me Chryss by Russian Revival. The dam of the latter is a half-sister to sire Meet At Malamala and Sugar Rush.

Whilst the overall aggregate was slightly lower then last year, the average per horse had increased since last year. The average paid this year was R28 082 whilst last year was R22 885. The highest price achieved at the sale was R425 000 for the Trippi weanling colt consigned by Spring Valley Stud, the highest amount paid for a horse off this sale since 2008.

Thank you to vendors and buyers who supported the sale and we wish you the best with your new acquisitions.

Check our Facebook Page KZN Breeders to see the gallery of the happenings at the sale. View the results online at the www.tba.co.za.