Gr1 Empress Club Stakes winner Camphoratus is first reserve in the Vodacom Durban July, and trainer Robbie Hill drew card 14. The Byword will be carrying 52kgs if she makes the final field, a week after racing in the KZN Breeders Million Mile.

Previous #kznbreds to attempt this double (the Million Mile and VDJ) have been Love Struck, Matador Man and Rabada.

The half-brothers Hawwaam and Rainbow Bridge with a strong #kznbred connection and damline, both grandparents (Jet Master and Pas De Basque) on their female side born and bred in KZN, drew 3 and 4 respectively.

The top horses in the betting for the 2019 Vodacom Durban July drew well when the final field for the R4.25-million, Grade 1 event was announced at a public function at the Gateway Theatre Of Shopping at Umhlanga on the North Coast just outside Durban at midday today.

Africa’s greatest racing event will be run over 2 200m at Greyville in Durban on Saturday, July 6 and the annual betting frenzy on the iconic race will now move into top gear heading the betting splurge across Southern Africa that will see more than R200 million being wagered on the special day.

There were no real surprises among the 18 horses named to contest the race and the inclusion of the Frank Robinson-trained Australian-bred colt Roy Had Enough was expected after his impressive victory in the Grade 3 Track & Ball Derby at Scottsville on Saturday. However, having made the final field, he did not fare well when it came to the draw and he will have to jump from at best the 14 barrier position.

Justin Snaith, who has five runners in the race, showed satisfaction with the 10 draw position for defending Vodacom Durban July champion Do It Again when he personally did the draw for his runners with the other four members of his team set to start from positions 5 for Miyabi Gold, 8 for Magnificent Seven, 11 for Made To Conquer and 12 for Doublemint.

Mike de Kock, who will saddle favourite Hawwaam, drew three for his star performer and big race favourite and six for his other three-year-old colt Barahin while Joey Ramsden was physically unimpressed with the 13 and 17 draws which he made for his two runners Fresnaye and Twist Of Fate.

Sean Tarry pulled top draws for three of his four horses with Tilbury Fort to jump from the inside pen with stable companion Return Flight alongside of him. The seven-year-old Legal Eagle got the seven draw while the three-year-old colt Zillzaal drew 20 which matched his carded number as the second reserve runner. Journalist: Richard McMillan.

The latest betting on the Vodacom Durban July as posted by Track & Ball is: 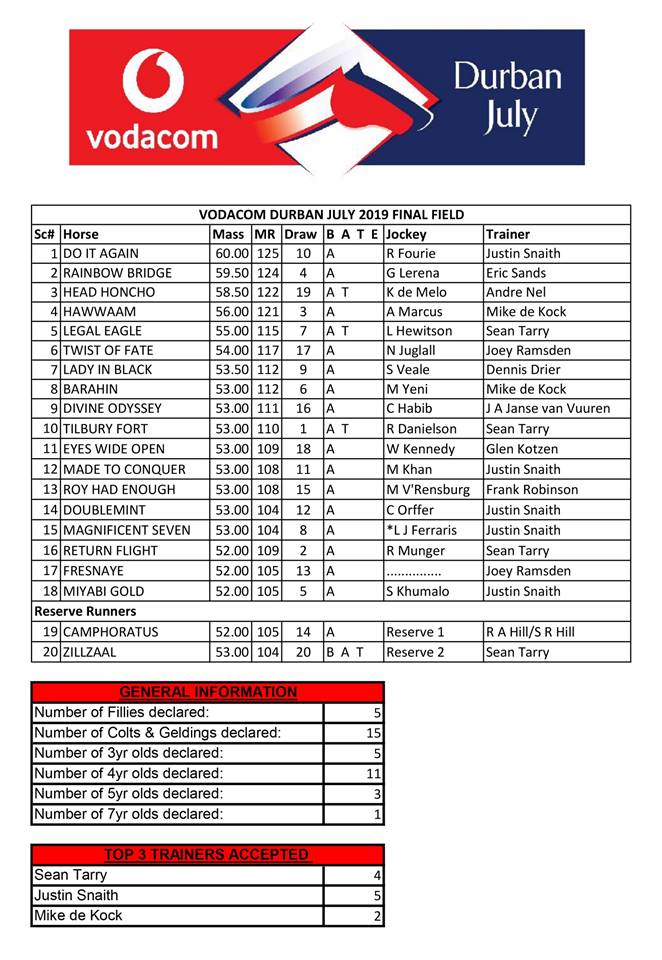