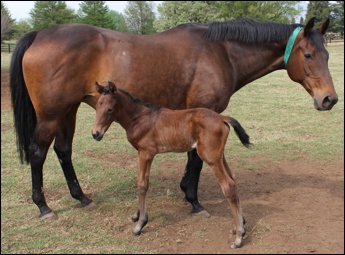 A boarding mare owned in a partnership at Rathmor Stud named War Echo (Complete Warrior – Distant Echoes by Prince Sao) has now had two “extended” gestation periods with both her foals and we discussed this unusual behaviour with Dr Allen Bechard of Almiray Veterinary Practice.

The mare was sent to stud at the age of 13 after spending her younger years as a show-jumper after a brief racing career.
She is a half-sister to Harry’s Echo and Champion Broodmare Stormsvlei – the dam of the mighty Pocket Power and River Jetez who is currently campaigning overseas.

Due to her purchase date, she was covered late in the season on the 20 November 2008. She foaled her Carpocrates filly (now named Athena’s Echo) on the 24 November 2009 – and because of her extended gestation period she was rushed back to Ravishing before the closing of breeding season, but unfortunately she re-absorbed the foetus which left her barren the next year.

She was subsequently covered by Ravishing on 2 September 2010, just the day after breeding season opened. Another interesting note about this mare is that she only visited Ravishing once – yet only conceived almost 10 days later – a testament to Ravishing’s exceptional fertility.

She was brought into the foaling barn early, the 12 July, to settle into her stable and new routine as her foal was expected early August 2011. She kept Mike and Tanya McHardy waiting, and she eventually foaled a beautiful Ravishing filly – now named by her owners Quest For Glory – at 11:08 pm on 11 September 2011. Mike McHardy was heard to say that War Echo had broken all gestation records at his farm!

Dr Allen Bechard says “the normal gestation for a mare is very variable but between 310 and 370 days is considered normal, with 340 days being usual. Mares tend to be consistently early or maybe consistently late. If we take 340 days as average, we have specific mares that usually foal 3 weeks early and other mares that are consistently late.
The foal gets its nourishment from the placenta which is attached to the inner lining of the uterus. The area of attachment plays an important role in the rate of growth of the foal. If a mare has some scar tissue affecting the uterine wall, or endometrial cysts or any other factors that reduces the area of placental attachment, the rate of growth of the foal is affected. The foaling process is largely dependent on the foal deciding its mature enough to be born. A late foal is not necessarily negatively affected.
There are not necessarily any dangers with a mare having a long pregnancy. The most important factor there being enough time to get her back in foal. I would expect all breeds to show a variance in gestation time, and gestation time would be partially hereditary.” 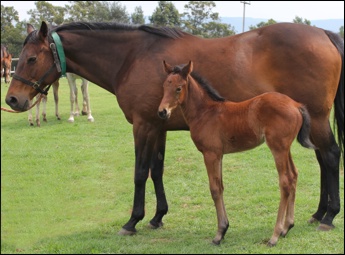 When discussing the possibility of mares being induced, Dr Allen Bechard says “mares can be induced, but there has to be an extremely good reason, such as another life threatening condition. The reason for this is that one is inducing a foal to be born that is not mature enough. The time from conception to maturation varies from mare to mare.”

War Echo has been sent to A.P. Answer this season.

Dr Allen Béchard B.V.Sc. (Pret) runs his veterinary practice from Nottingham Road. If you would like to contact his practice please see the details below:

If you would like to contact Rathmor Stud, please phone Mike or Tanya 033 – 266 6853 or alternatively email rathmor@bundunet.com.