Natalia Banasiak (B.Sc Zoology) has kindly provided us with an insight into how Rathmor Stud’s white Thoroughbred colt with the brown ears came to be. 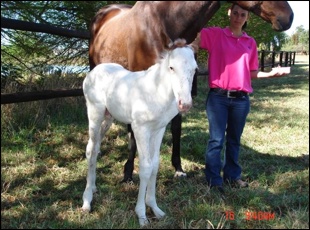 Traits are passed down from the parents down to the offspring: half a foal’s genetic make up comes from the dam and the other half from the sire. When the egg and sperm fuse to create the zygote, it results in a genetically unique foal. Mendel’s famous experiments with pea plants showed the principles of trait inheritance and they helped him develop the concept of recessive and dominant genes (though, of course, he didn’t know about genes at the time – that only came after the discovery of DNA around 90 years later). What he showed, basically, was that an individual has two copies of the allele responsible for each gene. Individuals can be either homozygous if the two alleles are the same or heterozygous if the two alleles are different and these alleles can have either recessive, complete dominant or partial dominant effects on each other.

We also need to differentiate between genotype and phenotype. The genotype of the individual is the genetic code (ie. the sequence of alleles present in an individual) while the physical manifestation of the genotype is the phenotype – basically what the horse looks like (in this case, the foal’s colour). How the horse looks is entirely dependant on its genotype – you can’t have a grey horse without the grey gene, or a coloured horse without one of the coloured genes – and how the genotype is expressed depends on the nature of the individual genes and alleles.

In most cases of heterozygous individuals, one gene will be dominant over the other (recessive) gene and so the individual will display the phenotype of the dominant gene. The recessive phenotype will only be displayed if the individual is homozygous for the recessive gene. In a few select cases, the genes will compete for dominance and will therefore appear as an in-between state of the two genes.

To demonstrate, let’s look at the base colours of horses: chestnut, black and bay. First we look at the Extension locus that determines if the horse will be ‘black’ (eumelanin is expressed) or ‘red’ (phaeomelanin is expressed). The alleles for this are E, which is the dominant extension allele for black pigmentation, and e, which is the recessive extension allele responsible for red pigmentation. So, the EE and Ee genotypes result in a black base phenotype and only the ee genotype will result in a red base phenotype, ie. a chestnut.

Next we look at the Agouti locus that ‘creates’ a bay by affecting the dilution of eumelanin and results in black remaining only at the horse’s points. The expression of Agouti (A) is dominant so both Aa and AA will result in a bay, while aa will leave a black. It has no effect on chestnuts as they have no eumelanin expression for the gene to work on.

All other colours work in essentially the same way. The cream dilutions are the best example of a case of incomplete dominance as the heterozygous and homozygous expressions of the genotype result in different phenotypes – think of the differences between a palomino (heterozygous, nCr) and a cremello (homozygous, CrCr).

Now that we’ve gone through the basics, I can get onto the complicated stuff relating to the KIT locus and hopefully make sense. The KIT locus determines all the paint patterns including rabicano and dominant white. For a horse to show the phenotype of these patterns it must have at least one copy of the gene as it is a dominant gene and multiple patterns can be present on the same horse.

At this juncture it is important to address the issue of mutation. Mutation in the genomic sequence is the basis of changes in all living things and this is inescapably linked to the process of evolution as selection (both natural and artificial) acts on the variation within a species. Even in the simplest case of two alleles at one locus, those two alleles must have arisen somehow. Mutations are especially important in creating variation within a closed population such as the Thoroughbred gene pool. There are many ways in which a mutation can occur and there are different types of mutations too. Since the KIT locus is long, this makes point mutations (the change of one base into another) occur relatively easily. Dominant White is caused by missense or nonsense mutations in the KIT locus which will become dominant. Missense mutations result in the production of an altered amino acid in the protein product and a nonsense mutation will create a ‘stop codon’ which will cause the transcription process to be truncated prematurely.

Once the mutated gene is created it is hereditary so the horse’s offspring have a 50% chance of inheriting the colour mutation.

I’m going to go through all the patterns to show the differences in patterns and I’ll put in brackets which do occur in the *TB gene pool.

Tobiano – not present in Thoroughbreds
Tobiano is the most dominant of the KIT mutations and is characterised by white markings that are smooth edged and cross the horse’s topline. Tobianos also often have white legs, two-toned tails and the white tends to be kept away from the eyes and face. The colour on a tobiano often radiates from source points on the horse that include the face, ears, chest, genitals and the tail tip. The medicine hat pattern is an extreme for of tobiano – so despite what many people have said about the Rathmor colt he is NOT a medicine hat even though the pattern is similar phenotypically. 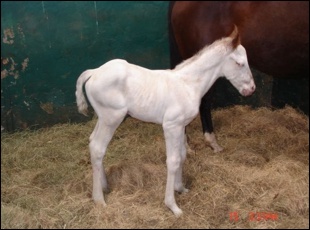 Frame/Frame Overo – present in Thoroughbreds, spontaneous mutation
Here the white markings are restricted to the body and neck (ie. no white over the topline) and have jagged edges. There may be white on the legs but it is not a ‘requirement’ and there is often extensive white over the face but typically over the eyes.

Splash – present in two Thoroughbred families (Hey What The and Mata Biru), spontaneous mutation
Horses with the splash gene typically have extensive white on the legs that can extend up the belly but rarely crosses the topline. Splash horses also have extensive white over the face that extends over the eyes and often results in blue eyes.

Sabino – present in Thoroughbreds, carried from Arabian ancestry
Probably the easiest of the paint patterns to overlook as it can often be mistaken for ‘normal’ markings like blazes and white stockings. In more characteristically marked horses, the pattern is irregular and jagged, gravitating upwards and on the face but avoiding the eyes. White lip markings and belly spots are also common. The edges of the markings may also take on a roan-like appearance. A homozygous sabino genotype (SbSb) is assumed to result in maximum expression of white. The edges get more and more roan-like as expression increases to the point where they can’t really be described as edges at all!

Rabicano – present in Thoroughbreds, carried from Arabian ancestry
Usually thought to be linked to roan, this is actually also a KIT mutation and is closer to sabino. It is characterised by white hair on the flank and dock; when maximally expressed it can be very dense but when minimally expressed it may only be expressed by sparse white hairs at the top of the tail (commonly called a skunk tail) or white hair occurring at the base of the tail. The roaning effects often spreads with age.

Dominant White – present in Thoroughbreds, spontaneous mutation
This is the pattern I predict the white colt is! So far, 11 mutations of the KIT locus have been identified, labelled W1 through W11; each of which is separately heritable and has a slightly different phenotypic expression. I stress, the phenotype of maximum sabinos and dominant whites can be almost indistinguishable but the genotypes are different so they are not the same thing. Dominant White horses are born with unpigmented pink skin, white hair and dark eyes however horses can also have patches of colour. These patches of colour tend to be located along the topline especially at the ears and mane. This is also not a form of albinism – something that has never been documented in horses.

In the Thoroughbred gene pool spontaneous DW mutations have occurred in the following cases – to name a few: