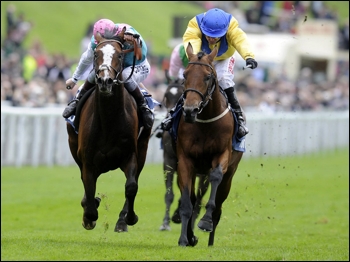 Saturday sees the 232nd running of the iconic Epsom Derby. The Group One race over a mile and four furlongs (2,423 metres), is rich with stories of horses that went onto become equine legends. Names such as Hyperion (1933), Mahmoud (1936) who was also the damsire of Natalma: dam of the iconic Northern Dancer, Sir Ivor (1968), Nijinsky (1970), Mill Reef (1971), Roberto (1972), Shergar (1981), Galileo (2001) & High Chaparral (2002) have won the race over the decades. Known as the middle leg of the English Triple Crown, preceded by the English 2000 Guineas and followed by the St Ledger, the race is one of the most historic of the three legs. Inaugurated on the toss of a coin by the 12th Earl of Derby and his host Sir Charles Bunbury in 1779 after the running of the Oak Stakes, the first version was won by Diomed, a colt owned by Sir Charles. In those days, the distance was 1 mile, but this was amended in 1784 to the present 1 ½ miles which stands to this day.

The “Derby” as it’s popularly known, became famous in 1913 in the most dramatic fashion, when suffragette Emily Davison jumped out in front of the horses. Struck by King George V’s horse Amner, she died four days later of her injuries. Apparently jockey Herbert Jones never got over the shock of the accident and committed suicide in 1951, thereby ensuring that that year’s race would be remembered for all the wrong reasons. In 2009, the financial colossus Investec took over the sponsorship of the race, and it will continue to be known as the Investec Derby until 2013.

The overwhelming favourite for this year’s running is the Aidan O Brien-trained colt, Camelot. The 3YO son of the recently deceased sire Montjeu, should be a shoe-in as his sire has a good record of winners in this race, having produced three of them in; Motivator (2005), Authorized (2007) and Pour Moi (2011). O Brien is having a purple patch of note, having recently won the Irish 2000 Guineas, and he has a strong hand in the race with four other highly promising entries in the race besides Camelot in Astrology, Dee Stakes (Gr.3) winner, the unbeaten Imperial Monarch: the 2011 winner of the Derby, Tower Rock the Derby Trial runner-up and maiden winner Father Of Science. If one were to go by his most recent win in the Irish 2000 Guineas, then it would seem that O Brien could hold the trump card.

South African’s will remember Mickdaam, who was with champion trainer, Mike de Kock for his Dubai campaign earlier this year. Now under Richard Fahey, he lines up with the field on Saturday. A recent winner of the Chester Vase (Gr.3), Mickdaam is aiming to become the first horse since 1990 (Quest For Fame) to win both the Chester and the Derby.

If the racing is not enough, then its worth remembering that this is the Diamond Jubilee year for Her Majesty Queen Elizabeth II, who will be in attendance on Saturday, and there are many celebratory jubilee events planned around the day’s racing.