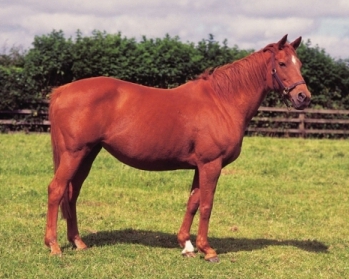 We’ve all heard the saying “behind every good man is a successful woman”, and it applies just as much to horses and it does to men. If you look at some of the world’s greatest sires, both past and present, half of their success comes from their dams, who are often overlooked and underrated for their contributions to the racing and breeding scene.

In the South African context, there are several mares, some of whom have long faded from the public’s memories but to whom we owe immense gratitude: Sun Lass who produced five individual stakes winners, Aquasarto, Preston Pan, and On The Roof (dam of the Group One winning and KZN-based sire, Badger’s Drift), Stormsvlei (dam of the multiple Group One and Group winners Pocket Power and River Jetez), Soho Secret (dam of London News and 3rd dam of Breeders Cup hero Pluck), Maritime (dam of the iconic Sea Cottage and granddam of many Group winners), Sister Sublime (dam of 14 foals, 13 of whom were winners, and granddam of the champion filly and multiple Group One and Group winner Roland’s Song who was the Champion Filly at 2 in 1987, Horse of the Year and Champion 3YO filly in 1988 and champion older female in 1989), Sister Sublime was also the 3rd granddam of the recently deceased champion racehorse and sire National Emblem, Droskhy (2nd dam of Sea Cottage and 3rd dam of Naval Escort), and foundation dam of various multiple Group winning progeny throughout South Africa.

Some people might argue that the great Miesque is the greatest of the modern era, not only did she produce several top class horses, but her racing record of 10 Group One wins, as opposed to Urban Seas’s 2 Group 3’s (Prix Gontaunt-Biron and Prix Exbury), a Group 2 (Prix d’Harcourt) and her only Group One, the prestigious Prix de la Arc de Triomphe (1993) does stand as a better result. However, even though Miesque produced Kingmambo (3 Group One wins) and successful sire of sires of Lemon Drop Kid, Henrythenavigator, King’s Best and El Condor Pasa, and Miesque’s Son (sire of KZN-based Miesque’s Approval, its safe to say that when you hear who Urban Sea produced- Galileo, there is not much more that can be said.

Urban Sea came with an interesting and varied pedigree, her sire was the Group One winning French based Miswaki, a leading broodmare sire in Great Britain and Ireland in 1999 and 2001. In turn Miswaki’s sire was the great American stallion Mr.Prospector, and his dam Hopespringseternal was the unraced daughter of Buckpasser, the broodmare sire of Hall Of Famers, Easy Goer, Slew O Gold, and Belmont Stakes winner, Coastal, who spent his golden years right here in KZN, at Summerhill Stud.

There is a strong classic influence in Urban Seas pedigree, something which Galileo has managed to successfully transmit down through his various lines. On her dam side Allegreta pops up, this feisty Stakes-placed mare (second in the Johnnie Walker Oaks Trial (G3) was the daughter of the German St Leger winner and Horse of the Year Lombard. Even though she never quite measured up to her sires ability on the track, she made up for it in the breeding shed as a successful producer of winners and Stakes placed horses.

Besides Urban Sea, Allegreta went to produce two successful fillies; the stakes-placed Turbaine (1990), and the stakes winner Allez Les Trois. It was her mating with Kingmambo which resulted in the brilliant King’s Best, who won Accomb Stakes at York (Group 3 for juveniles), after which he managed a second place in the Craven Stakes (Gr.3). It was his victory in the 2000 Guineas where he beat Giant’s Causeway, which will stand in the minds of many, King’s Best sprinted away to win the race by three lengths, the greatest margin since Zafonic won in 1993. However luck was not on the colts side, and he suffered a life threatening injury in the Irish Derby later that year ended a promising career. At stud he produced the top-class Workforce, who won the Epsom Derby and Prix de l Arc de Triomphe, before being retired to stud in Japan after his 2011 failure to make it back-to-back victories in the Arc.

During a stellar career at stud, Urban Sea was to produce many great foals, and became one of only a few mares to have two Derby winners to her name (Sea The Stars and Galileo), as well as the one of only two mares to foal a winner of the Arc, Sea The Stars, (Detroit dam of Carneige, the 1994 Arc winner was the other). It was her foal, a striking bay colt with a prominent white blaze by Sadler’s Wells, aptly named after the great Italian astronomer and philosopher Galileo Galelei, that was to be her greatest gift to the breeding and racing world.

Galileo is without doubt one of the greatest stallions the world has ever known. His legacy is massive, with well over 95 Group One, 275 Stakes and 59 Listed winners to his credit, he has revolutionised and dominated the breeding and racing world to such a degree, that there is not much left that one can say on the Irish-based stallion. His covering fee is not listed, and is recorded as private, which indicates just how valuable a commodity he is in the breeding shed. The fact that he is able to get winners over almost every distance from sprinting (Frankel 1000 metres or six furlongs) to staying (Alandri,4000 metres) shows a rare and incredible versatility.

Sadly Urban Sea died in 2009 after developing complications while giving birth to a colt by Invincible Spirit, named Born To Sea. Her last gift to the world, would go onto win the Blenheim Stakes (Listed), and give the great Camelot a run for his money with a hard fought runners-up place in the Irish Derby (Gr.1). Despite this, he never quite managed to garner the Group One success he should have, and in 2012 he was sent to stud, where he is certain to make a big impact on the breeding and racing scene in the near future.

When you push aside all the plaudits of Galileo, one is left with the undeniable truth, if it were not for his dam Urban Sea, and the other great dams throughout this past century, we wouldn’t have been blessed with the magic that their progeny through their exploits in the breeding sheds and the tracks have weaved through the fabric of the racing and breeding world.