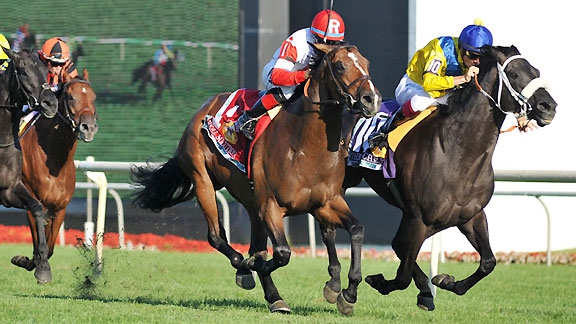 It was a day of heartbreaking seconds for champion South African trainer Mike de Kock on two continents. First, Soft Falling Rain was beaten by the 3-1 shot Gregorian in the Group 2 Hungerford Stakes in the UK, and then KZN’s golden boy The Apache, was disqualified and relegated to second place in the Arlington Million after it emerged he’d bumped Real Solution in the home straight for line honours.

Ridden by Christophe Soumillion, The Apache was kept handily poised near the middle of the field for the majority of the race, until asked to kick on in the home stretch. Displaying his famously powerful burst of speed, it appeared to everyone that The Apache was getting the better of Real Solution as they furiously battled for the line. The elation of Mike and the team was short-lived though, as jockey Alan Garcia and trainer Chris Brown launched immediate objections to his win, as they believed The Apache had bumped Real Solution several times in the race for the line. A nerve-wracking wait then ensued for both teams as the stewards reviewed the race. In the end, they reversed the decision and the Real Solution was declared the winner.

Understandably Mike and his team were devastated by the decision, though he did admit that “On viewing the head-on of the Arlington Million I can safely say that the second horse did get hampered by The Apache and had we got beat like that I would have felt aggrieved. I still think had The Apache gone straight he would have won”.

Jockey Christophe Soumillion backed Mike De Kock up by saying he believed The Apache was the better horse on the day, but that he had been frightened by one of advertising screens and had shifted out, thereby causing the unintentional interference with Real Solution. Mike would not be drawn on what his plans for The Apache are now, but it seems as if this KZN bred son of Mogok will be head off to further faraway shores for another crack at an elusive Group One win.

Congratulations go to Robin & Joyce Scott and their top class team at Scott Brothers for producing such a superstar of a horse, who thanks to his courage and class has shown not only South Africa but the world that if you want quality, then KZN is the place to get it.