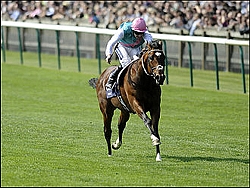 The brilliant speed sensation Frankel made it 11 wins from 11 starts yesterday, when he blew away the field to win the Queen Anne Stakes (Gr.1) on opening day at Ascot. The 4YO son of Galileo left no doubt in anybody’s mind that he is arguably the greatest racehorse of the past 25 years.

Putting behind an early season scare, Frankel was sent off at the incredible odds of 1-10. Kept in the middle of the pack by his long time jockey, Tom Queally, Frankel was content to just keep rolling along, relentlessly cutting his way through the field. Tracking his ¾ brother Bullet Train, he was given the nod with 3 furlongs to go, and turned on the gas to accelerate away, winning by a phenomenal 11 lengths from his long-time rival, Excelebration. 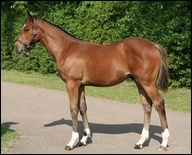 Sir Henry Cecil’s wonder colt will face a heavy workload in the next two months however, and Cecil will be praying that he is over his injury scare of earlier in the year. Cecil has confirmed that Frankel will likely line up next in the Eclipse Stakes (Gr.1) in early July, following that with a run the Sussex Stakes later in the same month, and if all goes well, the Juddmonte International (Gr.1) in August. After that, who knows, but the sky is the limit.

You had to hear the racing commentators and read the stories to know that Frankel is one of those one-in-a-million horses that come along every so often, stamp their mark on the hearts of all. We have so much to look forward to in the coming months!