The graduates of the 2011 KZN Yearling Sales that took place at the stunning venue of Suncoast last year, have revealed some interesting statistics. Bearing in mind, these horses are now two year olds, and many of the graduates have not started their racing careers yet – but the few that have are yielding excellent results.

Here we have a look at the horses emerging at the top of the class. It is important to point out that the combined sales price for the following seven horses amounts to a total of R270 000. Totalling up their stakes earned to date in their very young racing careers and they have earned a combined stake of almost R400 000.

Judging from their individual race records and what they have achieved in their first few starts, we are going to be seeing much more of these horses. Five of the horses are fillies, with one a colt and a gelding. Two of these horses won their races on debut, an admirable achievement – and two of them were first time winners for their young sires, Atso and Carpocrates.

They are also out of young KZN-resident stallions, and Scott Bros must take some credit here with five of the seven horses we are looking at by three of their resident stallions – namely Atso, Miesque’s Approval and Overlord. The other is Carpocrates and Cataloochee, the latter unfortunately passing away prematurely at stud. A great pity, as recently he has had a slew of winners. Yellow Star have bred two of them, and Scott Bros another two, with St Helier, Roski and Bush Hill Stud making up the difference. 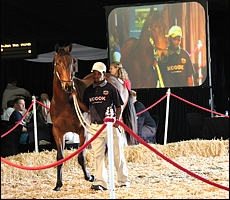 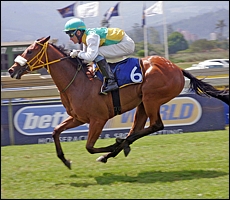 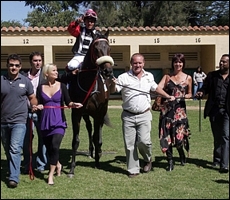 The first graduate is That So Atso, bred by Scott Bros. She made the news as she was her sire’s first winner from just two starters that he had at the time. By Atso out of Jump Ahead by Sapieha, she is trained by Duncan Howells. She won her debut run by over a length and she has had two starts to date and has earned R39 040 in stakes. That So Atso was a R30 000 purchase by Duncan Howells, who part owns the filly with Pierre du Toit. That So Atso is a half-sister to Intellectual by Spaceship(ARG), a six-time winner who also placed second in the Grade 1 Computaform Sprint, and running second and third over two years in the Grade 3 Lebelo Sprint, as well as three-time winner by Opera King, Puccini.

Nips Nugget, bred by Greg Royden-Turner of Roski Stud, is a bay filly who sold for R20 000 to Lowan Denysschen. She is by Overlord(AUS) out of Nip Of Gold by Harry Hotspur. She has had four starts and won her debut run, and since then she has placed twice including the Kings Pact Stakes. She has earned R44 040 in stakes. Her dam has produced 7 runners and 5 winners; and the dam-line includes Bold Black Type winners such as Gang Man, Jamaica, Tropical Lady, Divine Gift and Mighty Crystal to name a few.

Night Club, consigned by Bush Hill Stud, was in the news as the first winner for his sire, the superbly bred Carpocrates(USA). A R25 000 purchase, he was had 3 starts and has produced in all of them, winning once and placing twice. He ran third in his last start to Gr 1 Golden Horse Casino Sprint winner Potent Power. Out of the mare Social Club by Goldmark, he has now earned R52 690 in stakes. This is Social Club’s second foal. Night Club descends from an impressive dam-line that includes the likes of Appelate Court, with the fifth dam being the exceptional Party Time, who has produced a legacy of outstanding racehorses including the likes of Vodacom Durban July winner Trademark, Jackson Square and Morisco to name but a few from this family.

Yellow Star Stud’s Placido is a son of Miesque’s Approval(USA) out of Lady Gray by Badger Land. He sold for R85 000, and has earned R95 850 to date. Another horse with a most consistent record, he has had 6 starts, two wins and four places including three lengths off to Valdivia in the Dahlia Plate Listed. He was bought by Lee Scribante and he descends from the dam-line of Stakes winners Firetread, Electro Step and Empress Crown. It must be pointed out that he has a half-sister by Silvano on this year’s draft from Yellow Star Stud at the upcoming Suncoast KZN Yearling Sale, named Lady Silvia she should not be one to miss. 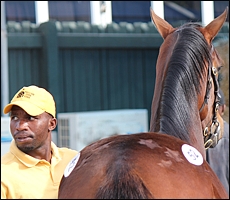 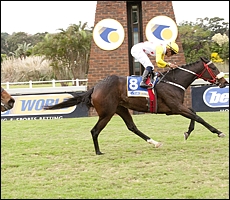 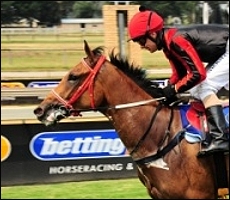 Gauntlet is another product of Yellow Star Stud, by Cataloochee out of Fort Victoria by Fort Wood. She has had two starts, and has won and placed in each. A R55 000 yearling, she has returned her sales price – and judging by her record there is much more to come from this filly. She has an Eyeofthetiger half-brother which will be offered at the Suncoast KZN Yearling Sale by Midlands Thoroughbreds, named Bull’s Eye. Fort Victoria has produced 4 runners and 3 winners. This dam-line includes sire Free Will, Gr 1 winner (5th dam) With Pleasure and second dam Victoria Bay is the S.A. Oaks Gr 2 winner.

The next daughter of Miesque’s Approval(USA) is Preamble, bred by St Helier Stud. She is out of Speedy Eli by Elliodor, and was a R45 000 purchase by Lloyd Lunn. Again, this filly has had two starts, winning one and unfortunately taking second in her last start by a nose. She has earned R52 785 and is another filly to keep a watch of. Her dam has a 100% record of producing 5 foals, 5 runners and 5 winners. This the family of Zimbabwean champions William Henry and Bluff, as well as Floating Taxi and second dam Speed Machine.

The last filly is another from Highdown Stud by Overlord(AUS), named Lady Cozzene. She is out of Cozzenes Princess by Jabal Tarik. A R10 000 purchase by Mr Rahilly, she has earned R46 875 to date, with a win from three starts. Her dam has produced six winners and she has a 2010 full brother named Your Worship. This is a dam-line bursting with Bold Black Type horses – including American sires Priolo, Gray Phantom, Misty Flight, Misty Day, Time For A Change, Exit 5 B, Bold Lad, Successor, Quick Turnover, Formal Dinner, Intrepid Hero and Primed. It is impossible to list all the Bold Black Type winners but also includes Queen Isolt.

Well done to the breeders of these horses and we look forward to the sale 5 and 6 July at Suncoast this year, finishing the day before the Vodacom Durban July.

The KZN Breeders Club have put exciting plans in place for the sale itself, including great incentives such as the Triple Million Challenge. Any yearlings graduating from the sale this year will be elligible to run in a race on Vodacom July Day in 2013, the KZN Breeders’ Cup for a stake of R1 million.

In the lead up to the sale, the KZN Breeders will be hosting a Golf Day which has already been well supported and offering massive prizes worth over R60 000 in value including weekend breaks. For more information please email Michelle or Mandy
or phone 031 561 5590.

Another exciting event following two days later on 1 July is the KZN Breeders Race Day, this time being held at Greyville. The KZN Breeders have upped the stakes from R250 000 to a R1 million this year – and the race is now known as the KZN Breeders Million Mile (ex KZN Breeders 1600). If you would like to find out more information about the race day, please email Keith Russon or Linda Norval.

This is the best time to buy a KZN-bred, to get in on the action and the chance to win R3 million.

*NEWSFLASH, since the publishing of the this article, another two graduates have won for their Freshman sires, that being Lady de Winter, who passed through unsold at the 2011 KZN Yearling Sale and won the first race for Lion Tamer standing at Avalon Stud (she has just had 2 starts, placing second in the other), as well as Croke Park, who sold for R20 000 at this sale last year and won his race on debut to be the first winner for another young sire, Mullins Bay. 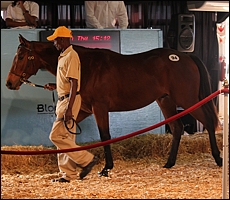 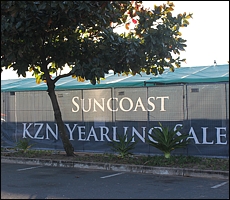 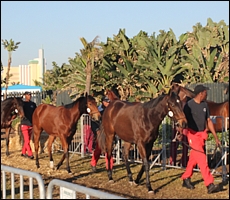