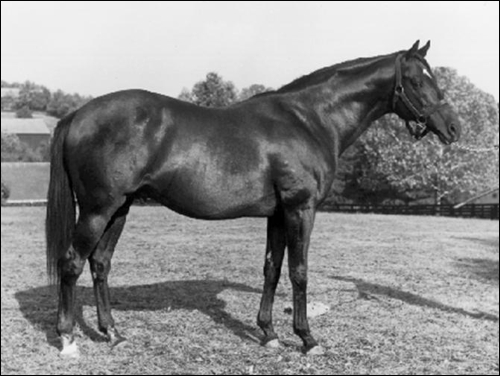 Video-footage in colour of the great sire Nasrullah taken in 1950 shows his arrival on a train after travelling from Ireland and his boarding a yellow lorry, destined for the famed Claiborne Farm in Kentucky where he went on to turn the breeding world on its head.

The clip is just a few minutes long but provides us with a glimpse of a great stallion we would not normally see from that era – a strong and athletic dark bay with plenty of character to match – which is evident in his behaviour after what must have been a challenging trip for any horse to travel across the world, more than 60 years ago.

There is a hardly a horse or stallion in this country, let alone KZN, that doesn’t carry the influence of this great sire. Woodborough standing at Rathmor Stud and Muhtafal at Spring Valley Stud both carry his blood in both their male and female sides of their pedigree.

David Schmitz of the blood-horse.com goes onto to tell the story of Nasrullah, a son of the great Nearco arrived from Ireland with star status for the 1951 breeding season and did nothing to dispel that image during his nine seasons at the Hancock family’s Claiborne Farm. Nasrullah went on to sire a then-record 98 stakes winners, and today his name continues to evoke memories of breeding and racing at the highest levels.

Male descendants Secretariat, Bold Ruler, Nashua, Never Bend, Seattle Slew, Mill Reef, and Blushing Groom, to name just a few, have seen to that. More than anything, Nasrullah supplied a new source of speed to the North American racehorse, and his blood, along with that of fellow Claiborne stallion Princequillo, provided an unbeatable combination.

The deal to stand Nasrullah at Claiborne was announced in the fall of 1949 and called for him to stand the 1950 season at Brownstown, after which he would be on his way to the famed Kentucky nursery. Nasrullah, who was a major winner in England for breeder/owner the Aga Khan, ranked third on the 1949 English/Irish sire list and was seventh in 1950 before heading the list in 1951. His reputation on these shores underwent a sizable boost in 1950 when a runner from an overseas crop, Noor, defeated the great Citation in four consecutive California stakes and was named champion older male that year. Noor also took home the title of the year’s leading money earner.

For Bull Hancock, the purchase of Nasrullah was a dream come true, the same way it had been when his father bought French import Sir Gallahad III in the mid-1920s for a breeding syndicate. Sir Gallahad III, whose first crop included Belair homebred Triple Crown winner Gallant Fox, developed into a leading sire and broodmare sire. The younger Hancock had tried twice before to buy Nasrullah, but the deals fell through.

Nasrullah’s first North American crop of foals arrived in 1952, when he was 12, and numbered 32. Viewed as precious commodities, they largely remained in the hands of their breeders. Only two sold as yearlings at auction, and they commanded $17,500 and $16,500 at the Keeneland summer sale, well above the vendue’s $9,746 average. (McGrath’s Nasrullah offspring, a filly named Araby, was foaled overseas and is included in the 32.)

Nasrullah, who was produced from the Blenheim II mare Mumtaz Begum, posted a remarkable 25% stakes winners from foals from his first crop. His eight stakes winners were led by millionaire Nashua, with Delta (later a Kentucky Broodmare of the Year), Flying Fury, Blue Ruler, Insouciant, Lea Lane, Jean’s Joe, and Independence rounding out the field. Two others, including Courtesy, were stakes-placed. Courtesy later gained fame as the dam of three stakes winners and as the third dam of champions Swale and Forty Niner. Another daughter, Natasha, produced major stakes winner Natashka, a future Kentucky Broodmare of the Year.

Nashua was bred by Belair Stud, and was intended to be sent to England to trainer Cecil Boyd-Rochfort. Belair owner Woodward was a keen follower of English racing and hoped Nashua might prove good enough to became his first Epsom Derby winner. Woodward unfortunately died when Nashua was a yearling, and the colt remained in the U.S. to race for Woodward’s son, William Woodward Jr., under the care of trainer James (Sunny Jim) Fitzsimmons.

Sound as a board and precocious enough to equal a six-furlong track record at Belmont Park as a 2-year-old, Nashua was Nasrullah’s leading money-earner at ages two, three, and four, and the nation’s leading earner as a 3-year-old. Those earnings went a long way in Nasrullah topping the sires of 2-year-olds list by progeny earnings in 1954 and the general sire list in 1955-56.

Nasrullah achieved a bit of stardom when three of his colts — Nashua, Jean’s Joe, and Flying Fury — lined up in the field of 10 for the 1955 Kentucky Derby. Nashua, the 6-5 favorite, gave it his best shot, but couldn’t overtake second-choice Swaps in the stretch and finished second. Jean’s Joe and Flying Fury never threatened and ran fifth and sixth, respectively.

Nashua rebounded to win the Preakness (in track-record time) and Belmont Stakes, both in the absence of Swaps, then took the Dwyer Stakes and Arlington Classic in the summer. Sale time rolled around at Keeneland in late July, and for the second consecutive year, Nasrullah led by average and was represented by the sale topper. (The 1954 sale topper, a colt out of Lurline B., brought a record $86,000. The price eclipsed the former mark of $75,000 for the Whisk Broom II colt New Broom in 1928.)

A month later, all eyes were back on Nashua and Swaps and their well-publicized match race at Washington Park in Chicago. Under Eddie Arcaro, Nashua scored by 6 1/2 lengths in what would be their final meeting. Nashua closed out the year with a fall triumph in the two-mile Jockey Club Gold Cup against older runners and was an easy choice for Horse of the Year and champion 3-year-old male.

The year 1955 was a time of change for Nashua away from the racetrack. The younger Woodward had died, and Nashua was put up for sale in late fall. On behalf of a syndicate, Leslie Combs II of Spendthrift Farm bid a record $1,251,200 and announced Nashua would run at four.

Remaining with Fitzsimmons, Nashua won six stakes, closing out his career with another score in the Jockey Club Gold Cup (in track record time). He entered stud at Spendthrift as racing’s all-time money earner, having earned $1,288,565.

Unlike Nasrullah, Nashua transmitted more stamina than speed to a pedigree, justified perhaps by the influence of his maternal grandsire, Kentucky Derby and Belmont Stakes winner Johnstown. Nonetheless, Nashua, a member of the Racing Hall of Fame, achieved status as a major stallion, siring 77 stakes winners.