When the first small crop of Visionaire’s hit the tracks in America, news began to filter through to South Africa that they were winning – not only winning repeatedly but his daughter Bacopa Breeze annointed him with his first Black Type win, taking the Laurel Smart Halo Listed. This was followed up with winning colt Outlook placing in a further two Listed races.

While this was happening, Visionaire was safely ensconced in the big beautiful American-styled stallion barn at one of South Africa’s Leading National breeders’ Summerhill Stud, who held the title for an incredible nine consecutive years and continue to be amongst the leaders.

Crowned Champion Freshman Sire for the South African racing season of 2014/2015, it was thanks to Team Valor’s Barry Irwin and his vision of what he wished to achieve from the breeding of his mares based in KZN that we have Visionaire standing in the province of KwaZulu Natal.

Regarding the importation of Visionaire, Barry Irwin said that Visionaire’s front leg conformation was one of the main reasons he selected Visionaire to be exported to South Africa. “I wanted to be able to breed to a stallion that would sire horses with correct front legs. And he is getting the job done!”

The first son of Grand Slam to stand at stud in South Africa and a grandson of the great Gone West, Visionaire left halfway through his first American breeding season to become one of the most exciting stallion prospects to arrive in 2011 in South Africa, standing his first year for a service fee of R20 000.

With the Gr1 King’s Bishop victory behind his name, amongst his other scintillating racing performances that included the Gr3 Gotham Stakes where he emerged from the thick fog the winner on the wire, they were all run in the same goosebump fashion that we are now seeing from one of America’s leading sprinter-milers, Honor Code.

Visionaire was one of the most expensive purchases made for Team Valor International, bought for seven figures with the intention of taking on the Triple Crown in 2008.

The green and red chevron silks of Team Valor are no strangers in South Africa, where Gr1 winners such as Ipi Tombi, Gypsy’s Warning, Irridescence and Ebony Flyer (to name just a few) have carried them to many outstanding victories locally and internationally.

On the international racing front, who could forget those colours on the back of Animal Kingdom as he kept the racing world on the edge of their seats at every start, amongst the biggest, sweeping to victory in the Gr1 Kentucky Derby and Gr1 Dubai World Cup.

Visionaire’s racing style is one of those that would leave you totally breathless and shaking your head in absolute disbelief at his sheer speed, turn of foot and tenacity. 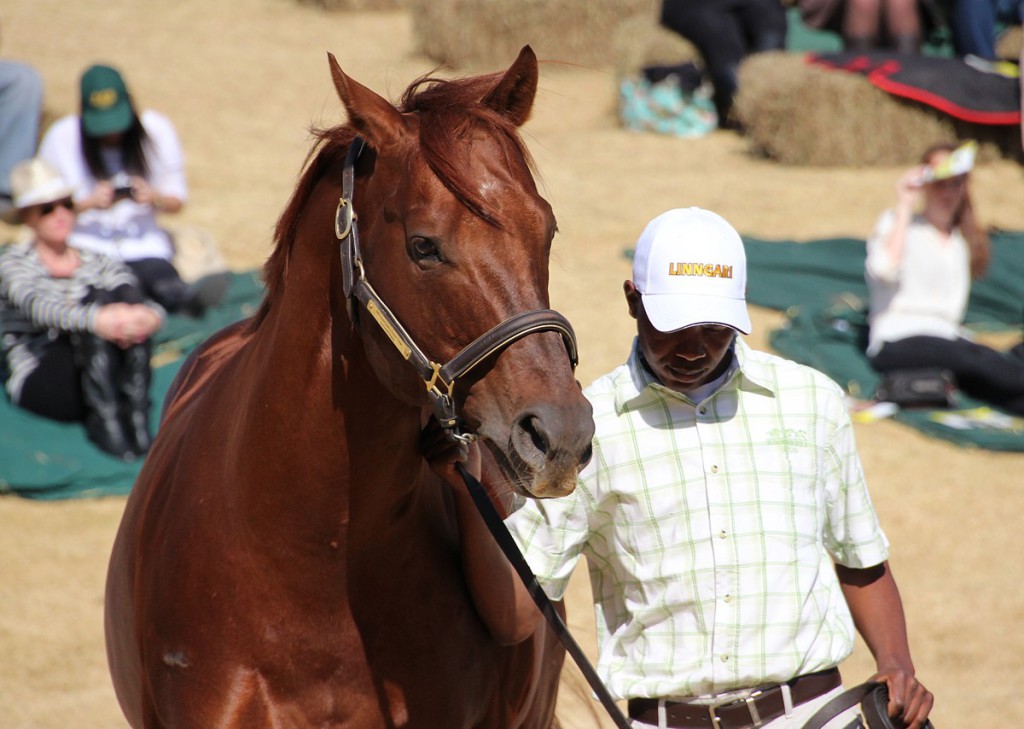 Jumping from the starting stalls to lie more than 10 lengths off the leader for most of the race – it looked impossible unitl he began eating up the ground off the turn and still managed to finish over two lengths ahead in the seven furlong race, that has seen the likes of Distorted Humor, More Than Ready and Elusive Quality etched into the honour roll.

It is really easy to see what Irwin liked so much about Visionaire. Out of mare Scarlet Deputy by French Deputy, he stands 16.1 with a handsome head, a big honest eye that reflects his kind temperament, a deep girth and powerful hindquarters, he has plenty of strength and substance about him.

All these qualities are passed on to his foals and its no surprise that his first yearlings averaged a very impressive R349 000 for 15 lots sold at the 2014 National Yearling Sale.

This was topped by an outstanding grey filly named Yoruba, bred by Summerhill Stud and a half-sister to Gr2 winner No Worries, knocked down for R1,4million to Ridgemont Stud. Another colt Diamontaire sold for R600 000, consigned by Somerset Stud and purchased by Team Valor. As a result Visionaire was the leading first season sire at the sale that year and his racing results wouldn’t disappoint.

At the 2014 Suncoast KZN Yearling Sale which takes place three months after the Nationals, Team Valor sold a chestnut filly out of King Of Kings mare Royal Purse for just R30 000 to World Wide Bloodstock. Almost a carbon copy of her sire in conformation including her gleaming chestnut coat, she was quickly taken up by 3A Racing Syndicate who having always previously leased horses, deciding to take the leap of faith and buy into a horse of their own. They formed a partnership with Andy Williams and Mrs Wintle. 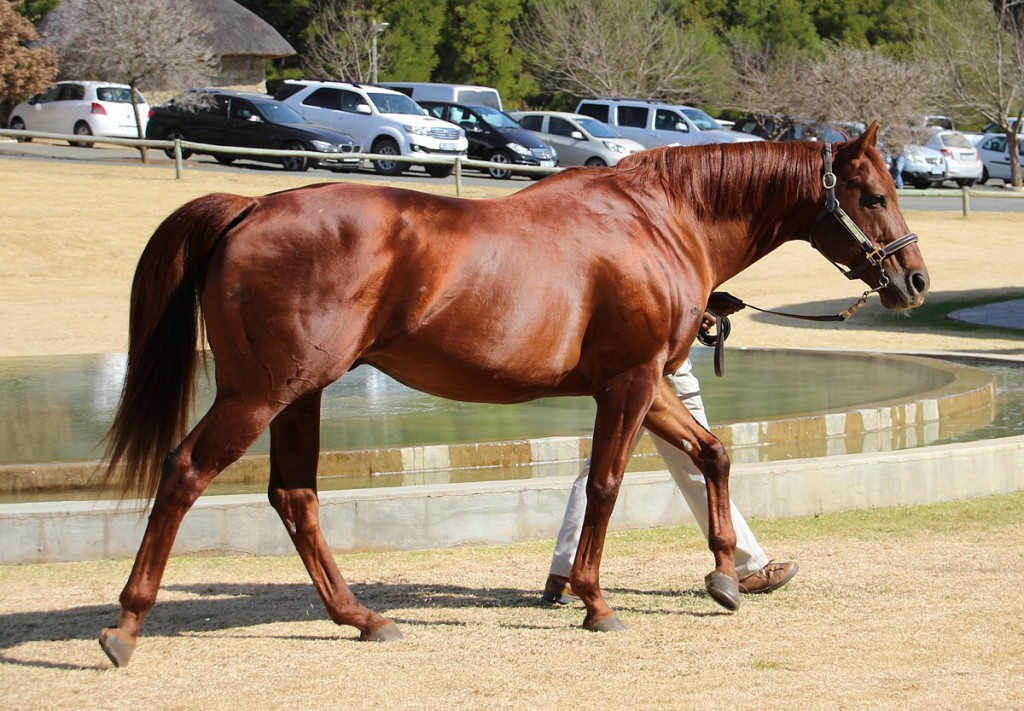 Sent into training with Glen Kotzen, Royal Pleasure would not only give her sire his first South African win but she would go on to give him his first Group win in South Africa.

Royal Pleasure debuted at Scottsville in the black and shocking pink silks of the 3A Racing Syndicate, where she didn’t just win but completely thrashed the opposition by almost seven lengths over 1000m under apprentice Callan Murray. The win was enough to make Team Valor take notice of the horse that they had sold just seven months before and they immediately bought back into the filly, buying out a few partners and formed a new partnership with 3A Racing as well as Anant and Vaneshree Singh.

Royal Pleasure made her second track appearance two months later in the colours of Team Valor, with Greg Cheyne flown up from Cape Town for the ride. Once again at Scottsville over a 1000m, this time in soft going she won comfortably by over two lengths in the Non-Black Type Kings Pact Stakes.

She was immediately entered for the Gr3 Strelitzia Stakes a month later, going into the 1100m race unbeaten. Ridden by Anton Marcus on this occasion, she won by three quarters of a length from Miracle Rising and Princess Royal – the latter a half-sister to four-time Gr1 winning Princess Victoria.

A decision was made to go for the Gr1 Allan Robertson but Royal Pleasure found the 1200m a bit to long, finishing courageously just out of the placings behind Equus Two Year Old Champion filly, Entisaar(AUS).

With 12 winners in America, it wasn’t just Royal Pleasure – the Visionaire’s began to make themselves known on racetracks across South Africa.

Doug Campbell’s Summerhill-bred Lala came out next, winning her debut and going on later to place in the Gr2 Debutante. Another impeccably bred colt by Team Valor, Jet Air has now won twice for trainer Mike Bass and owners’ Bryn Russell and Marsh Shirtliff, finishing four lengths off the unbeaten Gr1 winning Rabada in the Premiers Champion Stakes. Smart debut winner Virtuality, at odds of 33/1 showed punters the error of their ways, winning by two lengths at Turffontein for trainer David Niewenhuizen.

Barry Irwin comments on the progeny of Visionaire: “While Visionaire is certainly an agent for delivering speed to his offspring, he himself got better with age and I would expect his offspring to do so as well. I hope the trainers that have Visionaires are patient with the tall ones and give them a chance to develop, instead of just looking at them as precocious juveniles”.

With the Visionaire’s off the mark and the breeders clamouring to fill his book for 2015, the next racing season as three year olds is indeed going to be an exciting one as more of them begin to step on to the tracks for the first time. Visionaire stands at Summerhill Stud for the highest service fee in KZN of R40 000.