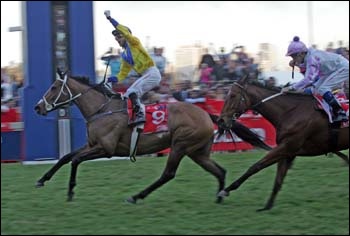 A hearty congratulations to Summerhill Stud for a notable July achievement of having the first two horses, Igugu and Pierre Jourdan across the Vodacom Durban July finishing line, an outstanding achievement for this notable farm based in the Kwa-Zulu Natal midlands.

Igugu(AUS), by Galileo out of Zarinia, became the 12th filly to win the Vodacom Durban July when she became the 2011 winner at Greyville Racecourse on Saturday 2 July. Her trainer Mike de Kock commented: “We haven’t got to the bottom of Igugu yet and I said before the race that she was probably better than her rating. Well done to the owners and my training team. They put a big effort into our July runners and we were quietly confident going into the race.”

Summerhill Sales sold Igugu as a 2 year old at the 2009 Emperors Palace Ready-To-Run sale for R1 000 000, after purchasing her at the 2009 Inglis Melbourne Premier Yearling Sale in Australia. She was sent to Summerhill Stud where she continued to be raised and grazed, she has currently earned herself over R4 million in stakes.

Pierre Jourdan, by Parade Leader out of Vin Fizz, ran a game second to the talented filly Igugu. Bred by Summerhill Stud and himself a graduate of the Emperors Palace Ready-To-Run sale in 2008, he was purchased for just R60 000, and he has proved himself to be a shrewd purchase, having earned over R3 million in stakes.

Well done to the owners and trainers involved in these two talented Thoroughbreds, we are looking forward to the future!