Gold Circle has advised that due to continued rainfall today, and in addition to the 115mm already recorded, the Super Saturday Canon Gold Cup Racemeeting scheduled for Greyville Racecourse tomorrow, 30 July 2011 has been postponed and will take place on Sunday, 31 July 2011. However, should conditions not improve sufficiently to stage this event on Sunday, Gold Circle and Canon have agreed that a further postponement to Saturday 6 August 2011 will be considered to ensure that this showcase raceday takes place for the benefit of all of horse racing’s stakeholders.

“This has been a difficult week for us all but most especially for the trainers and their charges and we sincerely regret the disruptions caused by the heavy unseasonal rains,” said Gold Circle’s Racing Director Graeme Hawkins. All race times remain unchanged for this venue.

Due to the above the Turffontein Racemeeting scheduled for Sunday will now take place on Saturday, 30 July 2011. New race times are as follows: 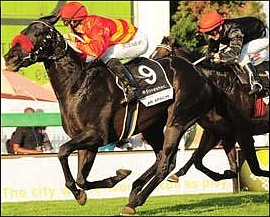 The KwaZulu-Natal yards of Gavin van Zyl, Dennis Drier and Ivan Moore have all won Grade 1 races this season and all have chances in the big features in the Super Saturday meeting at Greyville on Saturday that features the Grade 1 Canon Gold Cup together with six other features, including three Grade 1 races.

The ground is expected to be soft on the day.

Van Zyl runs Dingaans and Daily News winner and Vodacom Durban July fourth-placed The Apache in the Grade 1 Champions Cup over 1800m as well as July fifth placed Bulsara. The Apache was unlucky in the July losing some two lengths or so during the serious jostling incident down the back straight and this might have cost him a place or two. He is ideally suited to Greyville as he can make up ground quickly in the straight and then has a devastating late kick. He does have a Grade 1 penalty to carry though and is also drawn wide in 14. He ran in very soft going in the KRA Guineas and finished a fair fourth, although that was his first outing for six months and he clearly needed it. 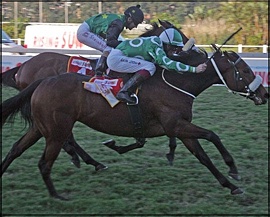 Van Zyl is very happy with The Apache’s work at the moment and said that he had gone better than Bulsara in a gallop last Thursday on the grass.
He said, “The Apache has come on from the July and his work has been better than in the past. Of the dangers, he said, “I think The Apache, Castlethorpe, who was unlucky in the July, Dancewiththedevil and Solo Traveller will make up the quartet.”

Dennis Drier also has Secret Babe in the Gold Bracelet.
Three of her four wins have come at Greyville including two over 1900m, but she does have a tough task at the weights. The yard also has a fine chance in the Grade 1 Thekwini Stakes over 1600m with Miss Ipanema. She went around the turn for the first time over 1400m at Greyville last time and won very impressively in a very good time, leaving a fair field strung out like the washing, which is usually the sign of good form. She has a similar draw this time of seven and the yard is also very pleased with her well-being. The bookmakers have shown her plenty of respect, making her the 4-1 third favourite, while it is interesting to note that her time for the Greyville 1400m was nearly a second quicker than the favourite Ilha Bela’s, although she did carry 1kg less.

Drier runs Dance At Daylight in the Canon Gold Cup. He has never gone beyond 1900m before but is from the family of the Gold Cup runner up Golden Peak and usually runs well at Greyville, while his only feature win came in slightly soft going. Drier contests another feature, the Listed Umgeni Handicap over 1000m, with a newcomer to the yard Saint Pierre, who is 1kg under sufferance.
Ivan Moore said that both of his charges for the Premier’s Champion Stakes, the Grade 1 Golden Horseshoe 1400m winner, Fighting Warrior, and the twice winner from three starts, Surruptitious by Overlord, were doing well. The former is drawn 14 and the latter five and Moore said, “I would have preferred to have their draws the other way round. The 1600m shouldn’t worry Fighting Warrior. He is very well and very full of himself. I think Surruptitious will make a very good three-year-old. He has improved tremendously since his last start and I think he is up to this class.” He regarded the whole field as “the dangers”, adding, “In racing you need luck in running.”