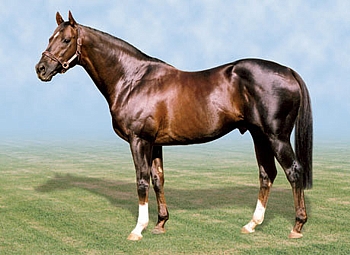 The racing world lost another equine great this week as National Emblem, who was based at Klawervlei Stud in the Cape passed away at age 21 from colic. One of the most versatile horses South Africa has had the privilege to witness for many years, National Emblem won from distances of 1200m to 2000m, and was considered by many to be one of the best horses of his generation at four.

The son of the unraced and now retired sire National Assembly, National Emblem was bred by the late Wilfred Koster and was sold for R100 000 as a yearling. He quickly repaid the faith in him, and showed his precocity and talent, when at two he won the Gosforth Juvenile Stakes (Gr.2) and two other races in a row. However it was at three that National Emblem really sparkled and showed his true class, with six wins including three major Group races; the Administrators Classic (Gr.1), Newmarket Guineas (Gr.3) and Jubilee Handicap (Gr.3).

National Emblem was named Champion Older Male at four and captured the John Skeaping Stakes (Gr.2), before his brave win under a huge weight in the Administrators Cup (Gr.1). He followed that up with a brilliant win in the Champion Stakes (Gr.1) where he beat the iconic London News. Retired to stud, National Emblem made a brief but successful return to the track where he captured the Keith Hepburn Champion Stakes and Chairman’s Stakes (both Gr.2) before finally calling it a day.

Sent to stud, National Emblem stood at Mick Goss’ Summerhill Stud from 1996 to 2005, before being sent to Klawervlei Stud in the Cape. KZN was fortunate that while National Emblem was based in the province, he produced some of his best progeny ever to race in South Africa.

The first of them was the legendary Nhlavini who died in 2012 with 15 wins from 1000m to 1600m to his credit. Over a lengthy racing career, he raked up over R2 775 million in winnings thanks to some scintillating Group victories in the Cape Flying Championship twice, the Diadem Stakes 3 times, the Golden Horse Sprint. Nhlavini was voted Equus Champion sprinter in 2001 and twice Champion Older Male in 2005 & 2006. The other of National Emblem’s famous sons is Rebel King, who also stands at Klawervlei Stud.

Rebel King emulated his half-brother Nhlavini by winning Cape Flying Championship and the Diadem Stakes as well as several other major Group races, finishing with earnings of over R2 million. In his first season as a sire, if he can produce offspring with the same ability as himself and his sire, we should be in for a treat.

National Emblem’s death at a relatively young age has robbed South African racing of one the most versatile and charismatic stallions of the past decade, but thanks to his potent legacy through his various offspring, we are likely to see the name of National Emblem in lights for many years to come on the racing scene.