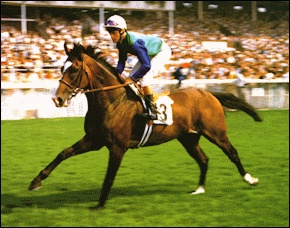 Sadler’s Wells (Northern Dancer – Fairy Bridge by Bold Reason) was born in 1981 in the USA, but raced and stood out his phenomenal stud career at Coolmore in Ireland. He went on to be leading sire in France, Great Britain & Ireland and North America, and becoming a Champion Sire-of-Sires.

His legacy lives on through his many fine sons standing at stud around the world, including right here in South Africa and KZN – with one of his best racing sons King Of Kings(IRE) now standing at Clifton Stud. King Of Kings is also the sire of a new addition to the KZN Breeders stallion ranks this season – King’s Chapel(NZ) currently standing at Bush Hill Stud. He is the broodmare sire of Bankable(IRE), another new exciting stallion prospect for KZN Breeders standing at Summerhill Stud.

Sadler’s Wells has certainly flown the flag for Northern Dancer’s amazing influence and genetics. Our Equus 2011 Award Horse-Of-The-Year is Igugu(AUS) – and her sire who is also proving himself a force to be reckoned with is Galileo who in turn is by Sadler’s Wells.

Sadler’s Wells is a full-brother to Classic Music, Tate Gallery and Fairy King – the latter having moderate success at stud – but not equalling his brother. He was a half-brother to Perugino (by Danzig), Hermitage – who stood in KZN prior to dying prematurely in his stud career and was by Storm Bird) – and Fairy Dancer (by Nijinsky II). 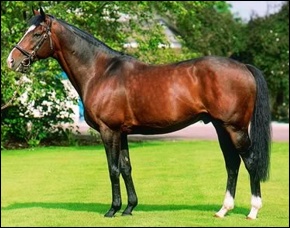 Sadler’s Wells captured both of his starts at two, including the Grade 2 Beresford Stakes, but was overshadowed by stablemate and fellow Northern Dancer son El Gran Senor (full-brother to Summerhill stalwart multiple champion sire Northern Guest), who ended 1983 as the champion 2-year-old in England and Ireland.

At three, Sadler’s Wells won the Grade 2 Derrinstown Stud Derby Trial Stakes before earning Classic glory in the G1 Irish 2000 Guineas. He followed with a runner-up finish in the Grade 1 Prix du Jockey Club, splitting future top sires Darshaan (GB) and Rainbow Quest.
He soon established himself as one of the toughest members of his generation thereafter, winning the Grade 1 Coral-Eclipse Stakes and Grade 1 Irish Champion Stakes, as well as finishing second in the Grade 1 King George VI and Queen Elizabeth Diamond Stakes.

The bay horse was rated 132 by Timeform and he entered stud at the age of 4 in 1985 at Coolmore as one of the most desirable stallion prospects in years owing to his fabulous pedigree – Northern Dancer was massive sensation at that time – and race record of winning 6 of his 11 starts in good company.

His stud fee was set high at an initial Ir125,000gns stud fee, but Sadler’s Wells managed to exceed even the highest hopes.

His first pair of colts from his first crop – Prince of Dance(GB) and Scenic(Ire) – deadheated for victory in the 1988 Grade 1 Dewhurst Stakes. They were joined by Old Vic (GB), who doubled up in the G1 Prix du Jockey-Club and Gr 1 Irish Derby; and In the Wings(GB), who captured the 1990 Gr 1 Breeders’ Cup Turf. 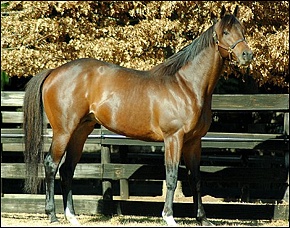 These early successes kept breeders clamouring for his services, and Sadler’s Wells continued to deliver while covering big books of well-bred mares. The services of his Classic-winning sons Galileo (Ire) and Montjeu (Ire) are in high demand. Another son, El Prado (Ire), led the USA sire list in 2002, and is responsible for Medaglia d’Oro, who is establishing himself as a formidable sire the USA.

Steve Miller, a Thoroughbred owner wrote the following about the progeny of Sadler’s Wells, and has some interesting comments regarding King Of Kings(IRE). 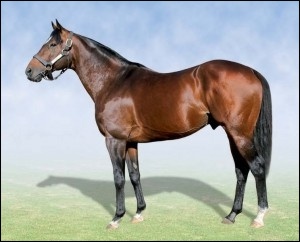 “Irish Oaks winner Dance Design (ex Elegance In Design) and King Of Kings (ex Zummerudd) are both out of daughters of Habitat. The Sadler’s Wells/Habitat cross has resulted in 32 foals of racing age and no less than eight stakes winners (a 25% strike rate), including Barathea, Batshoof, Alnasr Alwasheek, Dance Design and King Of Kings. As I suggest above, King Of Kings, winner of the 2,000 Guineas, is almost a better advertisement for Sadler’s Wells’s influence for stamina than Ascot Gold Cup winner Kayf Tara (ex Colorspin). This is because King Of Kings is from a distaff line of pure sprinters, out of Zummerudd (DI 12.14, which indicates brilliant speed, DP 32-8-5-1-0, CD 1.54), who in turn is by Habitat. It is therefore solely through the influence of Sadler’s Wells that King Of Kings stays 8 furlongs (and probably a bit further).”

On 13 May 2008 Coolmore announced that Sadler’s Wells was retiring from breeding due to declining fertility. He had been at Coolmore Ireland since 1985. Sadler’s Wells died peacefully on 26 April 2011 at the grand age of 30 at Coolmore Stud.