The first two year old crops for Carpocrates and Mullins Bay have hit the tracks, and it is exciting times indeed.

Carpocrates of Middlefield Stud, a stallion with one of the finest pedigrees in South Africa, from just 12 runners he has had three winners with four placings across the board. Extra Zing is his latest winner, out of the mare Linsumi by Linney Head, a half-sister to Wishful Eye. Wishful Eye is a three-time winner including the In Full Flight Listed Handicap, as well as placing twice in the Kwa-Zulu Natal Stakes Listed race consecutively.

Extra Zing won at the Vaal over 1000m for Robbie Sage by an incredible three lengths on 19 July. Extra Zing’s full-brother sold at the 2012 National Yearling Sale for R210 000 named Wishful Heart, currently in pre-training with Bradley McHardy at Rathmor Stud. Linsumi is owned by Middlefield Stud, Rob and Michele Pickering appear to be on a winning streak with this daughter of Linney Head and her progeny. Extra Zing is owned by breeders Rob and Michele Pickering of Middlefield Stud, as well as Mr Miliotis and Mr McNabb. 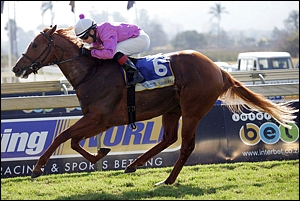 His other two winners have been Bush-hill bred Night Club (Social Club by Goldmark), the first winner for Carpocrates. Night Club has had four runs with a win and two places. Zirconia, out of Katarina Star by Allied Flag, has had two starts and win on 3 July, also in the Vaal over 1200m.

Mullins Bay, a big substantial bay son of Machiavellian at Summerhill Stud, has had 13 runners and 2 winners to date, the first being Somerset Stud-bred Croke Park and the latest Gitiano, who has now won and placed from both starts.

Gitiano is out of Poppy Elizabeth by Jet Master and placed third in his first start at Clairwood over 1200m, going on to win at Scottsville on 10 July over the same distance by 1,5 lengths. Gitiano is the dam’s first foal, she has a yearling by Admire Main named Pulchinella. Gitiano is a descendant of the great broodmare Party Time which includes the likes of Morisco, Trademark and Jackson Square. Bred by the Valjub Close Corporation, Gitiano is owned by Mr E and Mrs G Baisero.

The European Bloodstock Newsletter has reported that with the breeding season just around the corner, there have been some welcome recent updates to the pedigree of Clifton Stud newcomer A P Answer, much to the delight of stud owner Peter Blyth.

The grandam Soundings (Mr Prospector) is out of the Natalma Stakes victress Ocean’s Answer (Northern Answer), a three-parts-sister in blood to the dual Canadian champion Northernette (Northern Dancer) who, in turn, is the third dam of the recent Gr.3 Balanchine Stakes winner and as yet unbeaten juvenile Sendmylovetorose (Bahamian Bounty).

Although his career was compromised by a knee injury, A P Answer managed to score twice on turf in the States, both times over a mile. The imposing bay, who stands 16hh, retired to Clifton in 2010.

A P Answer’s first crop of foals are outstanding and the future looks exciting for the bay son of A.P. Indy.