Spectrum has proved himself over again as a Broodmare Sire of some respect, with maternal grand-daughter Up by sire of the moment Galileo, winning at the Curragh on Sunday. The three year old filly out of Halland Park Lass took the Gr 3 Lanwades Stud Fillies’ Stakes only eight days after competing in the Gr 1 Beverly D Stakes America.

Up led home a 1-2 for Galileo after beating the David Wachman-trained Aloof to land the 10-furlong contest.

Up had finished sixth in the Gr 1 Beverly D Stakes at Arlington last weekend and O’Brien said: “She was in the US last week and got back on Monday. She is a hardy filly and got the trip well today. She has always promised to be nice but things just didn’t work out for her. She’ll run again in another fillies’ Group race, maybe the Gr 1 Matron Stakes.” The filly is a half-sister to UK sire, Dutch Art. 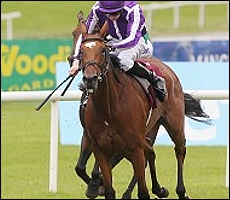 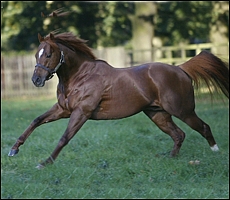 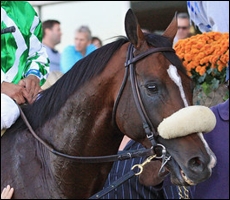 Spectrum recently impressed everyone at the recent Yellow Star Stud Stallion Day with his good looks and masculinity – especially at his 20 years of age – he looks every inch of the epitomy of what a stallion should look like and breeders should be taking advantage of him, if they wish to strengthen their broodmare bands for the future.

The maternal grandsire of Group 1 winning sire in the UK, Dutch Art, lying ninth in the top sire of two year olds in Britain and Ireland (ahead of the likes of Pivotal and Danehill Dancer), ninth on the log of Top Sires of European Stakes Winners and currently 24th on the British and Irish log by Stakes Earned – is ahead of his own sire Medicean. Another four-time Group 1 winner Winchester, by Theatrical out of a Spectrum mare, stood his first season in Kentucky this year.

Spectrum is currently lying 12th on the British/Irish Broodmare Sires’ log by Total Stakes Earned. There are some big names present in the list following behind him including the likes of Royal Academy, Machiavellian, Fairy King, Zafonic and Selkirk.

Spectrum stands alongside Damage Is Done, Kildonan and Tropical Empire.

Click on the G1 Goldmine link on the right to match your mare’s pedigree to Spectrum.