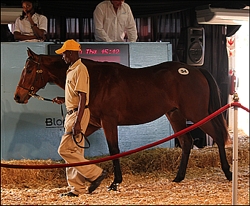 Yellow Star-bred Placido ran a third in the Grade 3 Champions Juvenile Cup for 2 Year Olds, at Fairview yesterday over 1400m.

He becomes the second horse since Eton Square in the Grade 1 Vodacom Durban July (as well as a Grade 3) to add another Stakes Place to the tally for sire Miesque’s Approval.

Placido has now had 8 starts, 3 wins and 5 places – a horse that has yet to be out of the money including being placed in May this year in the Dahlia Plate Listed.

An R85 000 graduate of the 2011 KZN Yearling Sale, he was bought by Lee Scribante and descends from the dam-line of Stakes winners Firetread, Electro Step and Empress Crown. Placido has already earned over R150 000 in stakes.

Lee went onto buy Placido’s half-sister by Silvano, Lady Silvia, from the 2012 Suncoast KZN Yearling Sale recently for R200 000. Both horses are bred by Yellow Star Stud out of their Badger Land mare, Lady Gray.

Miesque’s Approval, a stallion that is getting more winners and stronger every day, stands for the same fee of R35 000 as he did previously at Scott Bros. A very tough and sound individual, Miesque’s Approval was an Eclipse Award winner in the USA with 12 wins and earned a very respectable $2,612,529 in stakes. He won over distances of 1600-1800m including the Breeders Cup Mile Gr.1, Makers Mark Mile Stakes, Gr.2, Firecracker Handicap, Gr.2, Red Bank Stakes, Gr.3, Kent Stakes, Gr.3, and the Pilgrim Stakes and achieved a Time Form Rating of 126. 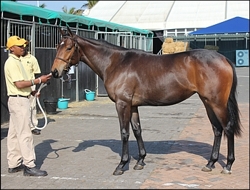 He was also voted Champion Turf Horse in USA in 2006 as well as being the highest ranked horse in the world from the Mr Prospector line of that year.

He is a half-brother to multiple Stakes and 20-time winning Revved Up.

His sire Miesque’s Son was a multiple Gr 1 placed Gr 3 winner in France (Timeform 117) and a full brother to successful sire Kingmambo. Their dam is Miesque – a dual Breeder’s Cup Mile winner. Miesque’s Son is the sire of Gr1 winners and a Sire of Sires.

His dam Win Approval has produced five horses, who between them have all achieved an incredible 50 wins. She is by With Approval out of a Hoist The Flag mare, Negotiator.

Contact Robin Scott on 033 266 6918 to make a booking to Miesque’s Approval this season or email scottbros@worldonline.co.za .

Congratulations to breeders’ Yellow Star Stud and owner Lee Scribante. We are sure to see much more come from these two horses in the future.