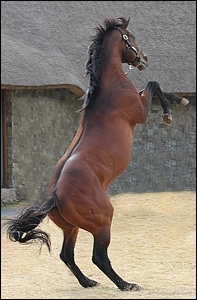 Two of KZN’s stallions, and specifically Bush Hill Stud’s resident stallions Kahal and Newton, are in the top 10 National Sires Log (stats up to 13 August 2012) with Kahal securing the lead (stakes of R298 050) followed by Captain Al, Jallad, Var and KZN-bred Jet Master.

Kahal is also not surprisingly, leading the way in KZN too, with stakes earned of R132 375, followed by that of Western Winter and Jet Master. Kahal recently relocated to Bush Hill Stud and Warwick Render reports that the stallion has settled in very nicely.

It must be pointed out that the stallions such as Captain Al, Var and Jet Master prior to his death command high service fees, double the amount at least to that of Kahal who stands for a very reasonable R40 000 this season. 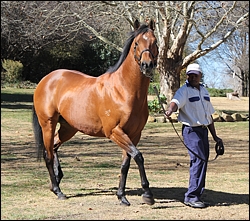 Another lovely surprise to see in seventh position is Newton(IRE) with stakes earnings of R209 375.

The son of Danehill has had recent winners with the likes of Caryl’s Law (out of Caryl’s Pride by Dancing Duel) and Ruby King (out of Gold Lass by Goldkeeper).

Caryl’s Law is leading the horses for the season nationally with earnings of R125 000, followed by Ruby King with R84 375.

From a total of just 28 of Newton’s progeny to race, his progeny have amassed 46 places and 22 wins between them.

Bush Hill Stud will be hosting their annual Stallion Day and luncheon on Friday 24 August at 12pm with their new stallion acquisition Curved Ball(AUS), Kahal(GB), King’s Chapel(AUS) and Lion Tamer from Avalon Stud on show.