Hadlow Stud have welcomed the first foal of Call To Combat, a colt which Cathy Martin describes as “a big strapping boy looks more like his dad than his mom! He is out of the All Fired Up mare Silent Heat. He was born at 11:45 on 18 August.”

Call To Combat stood his first season last year and stands alongside his sire Announce who recently relocated to Hadlow Stud from the Cape.

Call To Combat was trained and by St John Gray who retains the horse as a stallion (for Graystone Stud) at Hadlow Stud. Call To Combat achieved seven wins, with seven places at the racetrack.

His wins include 1600 Wolf Power Listed, and placing in the Drum Star Listed Handicap as well as the Gr 2 Victory Moon Stakes and earning almost R500 000 in stakes. He is out of the mare Gamaliya by Rakeen.

The dam Silent Heat is out of the mare Finest View (Gr 1 SA Fillies Guineas winner) by Fine Edge, in turn out of a Del Sarto mare Aquasarto, the dam of sire Argonaut, as well as Simply Salmon and Oceana. 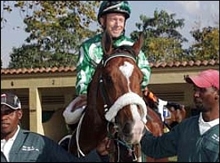 The newborn colt is a half-brother to Weather Girl (by Announce), a winner who has also placed twice, as well as Hell Alley (by Jam Alley) who won his last start out by over 3 lengths at Turffontein in June. This horse also placed previously.