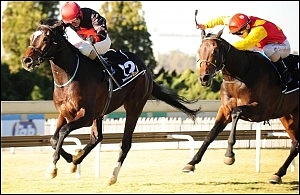 Eton Square is out of the mare Monroe by Model Man. He finished second in his debut run and his second run resulted in a win at the Vaal by almost two lengths at even weights of 60kgs. His third start over 1600m at Turffontein resulted in a second to Without Malice and he won his race over 1800m on Sunday 10 June from Golden Crest, with Smanjemanje finishing third and Meadow Magic fourth.

The field also had the likes of Gr 1 winner Seal and Without Malice finishing 17 lengths off. Eton Square takes his impressive record of four starts, two wins and two seconds earning him R207 875.

The gelding is trained by Gavin Van Zyl. Eton Square is a R280 000 graduate of the 2010 National Two Year Old Sale. He descends from the dam-line of London News with his third dam being Underground Lady.

A very tough and sound individual, sire Miesque’s Approval was an Eclipse Award winner in the USA with 12 wins and earning a very respectable $2,612,529 in stakes. He won over distances of 1600-1800m including the Breeders Cup Mile Gr.1, Makers Mark Mile Stakes, Gr.2, Firecracker Handicap, Gr.2, Red Bank Stakes, Gr.3, Kent Stakes, Gr.3, and the Pilgrim Stakes and achieved a Time Form Rating of 126.

Miesque’s Approval was voted Champion Turf Horse in USA in 2006 as well as being the highest ranked horse in the world from the Mr Prospector line of that year. He is a half-brother multiple Stakes and 20-time winning Revved Up.

Congratulations must go to Scott Bros and the connections of this horse, who we are sure to see much more of.