Well attended by KZN Breeders’ and owners alike, it was a fascinating look at pedigrees – and what pricked everyone’s attention were what pedigree nicks are proven but what mostly has been shown to be unproven or rather, unsuccessful both locally and internationally; from what would be expected to be top-notch pedigrees with most surprising results.

One example being that Storm Cat male on female lines don’t work – theory being that when in-breeding takes place it duplicates the good, but also the bad qualities. Tsatsaronis explained that in the USA inbreeding to Storm Cat through both male and female lines in one pedigree had a tendency to breed heavy racehorses with large hindquarters and wind-problems – however the most successful cross internationally and locally has been Storm Cat on Damascus mares (locally proved with Villandry and Twitter).

Mr Prospector, with his ‘skew’ legs however, has been the opposite of what breeders expected, anticipating breeding horses with poor conformation and unsoundness, it has actually had the opposite effect and been shown to be highly successful with male and female lines in the same pedigree, without disadvantages and showing these horses to get better with age and train on.

Other proven (international) good examples given were Kingmambo on Sadler’s Wells mares’ (exciting for Scott Bros with the likes of Miesque’s Approval or Atso on Dolpour/Hinton Wells mares), and Rock Of Gibraltar on Rainbow Quest mares (we must remember how fortunate we are to have the exceptional broodmare sire in KZN in Spectrum – with potential Rocky Street mares we could have an adventurous breeding future!)

He also brought up an interesting scenario regarding the famed Northern Dancer/Bold Ruler cross, one that has been successful for years throughout the world but has an “endangerment to reversion of mediocrity” which is a valid point; what started off as an exceptional pedigree is now ordinary as so many Thoroughbreds around the world carry these genetics and they have been diluted. 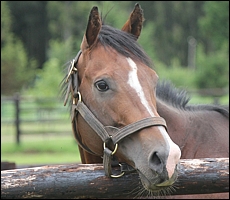 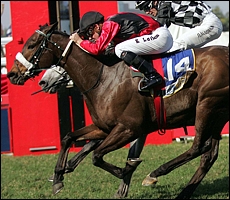 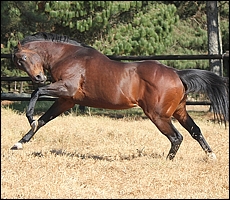 Another eye-opener was the example of breeding to the female such as Moccasin and Thong (two full-sisters), and G1 Goldmine was able to prove that Moccasin in the male line over Thong in the female line has been most unsuccessful, however if their places are switched in the pedigree, it gives a successful effect. Indeed food for thought.

Another good point made was that breeders tend to get an idea and try it repeatedly without success and run the danger of damaging the stallions’ reputations with incorrect theories.

With this programme you are able to choose which stallions you would like to breed to, and then given the option to view the pedigrees’ success either locally or internationally – it will give a list of horses’ names and the Group races they have won – as well as to tell you if they are precocious two year olds, sprinters, middle distance, stayers or if they train on or not. The results were most interesting. These were just a few examples of Tsatsaronis’ knowledge and research of pedigrees, as well as the helpfulness of his pedigree software that is used worldwide amongst breeders, including the likes of Coolmore and Spendthrift, with over 3200 users in 24 countries.

The KZN Breeders website will soon be making use of this international software for our individual breeders who are registered with G1 Goldmine, which will be added to their respective stallions – an immensely helpful tool for mare owners out there looking for the perfect mating. Selected farms will offer financial incentives to mare-owners should the pedigree produce a 20/20 mating – which indicates a successful pedigree combination.

G1 Goldmine offers registration of the package, which can be easily downloaded online. A trial version is available online. For further information and registration please visit www.g1goldmine.com.

KZN Breeders Club would like to thank Leo Tsatsaronis for making the trip to visit us and share his knowledge.