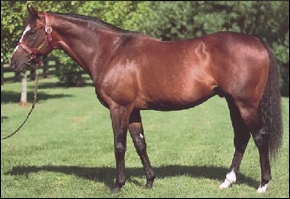 Nureyev was one of those horses whose stratospheric yearling price of $1.3 million in 1978 and championship status on the racetrack earned plenty of attention. That type of attention was nothing compared to the type of admiration he later earned for his many accomplishments at stud and for coming back from a life-threatening injury.

His influence as a Sire-Of-Sires continues today, with many successful sons standing at stud – including descendants in KZN.

Atso(USA), standing at Scott Bros, has sired his first winner (on her track debut) from just two runners on the track so far. Another fellow resident stallion at Scott Bros is Miesque’s Approval(USA) who is producing winners weekly, and was voted as KZN Breeders best stallion prospect. We have Malhub(USA) – sire of Midnight Serenade and Onehundredacrewood – and Way West(AUS) – sire of Way West Goddess – at Summerhill Stud, and Jam Alley(AUS), the only son of Peintre Celebre in South Africa at stud who has produced Dance Alley, standing at Hadlow Stud. St Petersburg stands at Summerhill Stud.

Nureyev, born in 1977, was sired by the great Northern Dancer out of the mare Special, making him a half-brother to several winners including Fairy Bridge the dam of Sadler’s Wells.

Nureyev was bred by the Hancock family’s Claiborne Farm and foaled five days before Seattle Slew won the 1977 Kentucky Derby (gr. I). Fourteen months later, the smallish colt was part of the Claiborne consignment at the Keeneland July yearling sale and was one of 10 Northern Dancers catalogued. The third foal from the Forli mare Special, Nureyev was a half-brother to Irish champion 2-year-old filly Fairy Bridge and to another 2-year-old winner. The quality in the female family went all the way back to champions Gamely, Moccasin, Ridan, and Thatch under third dam Rough Shod II.

The bidding started shockingly low at $20,000 for a colt that many had figured would fetch at least $275,000. It kept moving up slowly before Joss Collins of the British Bloodstock Agency London took up the chase against the BBA Ireland. The latter group went as high as $1.25 million, but Collins won out with a $1.3-million bid on behalf of Greek shipping magnate Stavros Niarchos. It was the most paid for a yearling since Secretariat’s son Canadian Bound sold for $1.5 million at the 1976 Keeneland sale.

Trained by Francois Boutin, in November 1979 Nureyev made his two-year-old racing debut in France. He easily out paced the field in the Prix Thomas Bryon at Saint-Cloud Racecourse, winning by six lengths. The following spring of 1980 he won the Prix Djebel at Maisons-Laffitte Racecourse in his 3-year-old debut. 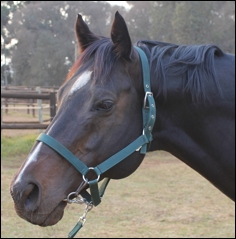 Sent to Newmarket Racecourse in the United Kingdom for the 2,000 Guineas, it seems that Nureyev had little patience with the rest of the field, pushing his way between horses to get to the lead and to victory. However, his win would be overturned by the racing stewards, the first time a winner of the 2,000 Guineas Classic was disqualified. Scheduled to compete in June’s Epsom Derby, Nureyev came down with a virus and never raced again.

Nureyev was sent to stand at stud at his owner’s Haras de Fresnay-le-Buffard in Neuvy-au-Houlme in Lower Normandy. Renowned French horseman Alec Head recommended Nureyev to Lexington, Kentucky breeder John T. L. Jones, Jr. and in mid-1981 put together a syndicate that purchased Nureyev for US$14 million. Nureyev was sent to Jones’ Walmac-Warnerton Farm partnership near Lexington and then under Jones’ wholly owned Walmac International. Under the management of Walmac owner John T.L. Jones Jr., Nureyev developed a lasting reputation as a sire of all types of celebrated grass runners, while experiencing fertility problems for much of his career.

Nureyev has sired 130 stakes winners, 20-plus champions, and has a son in Theatrical who ranks as one of North America’s top turf stallions. As events unfolded, Nureyev turned out to be “a North American stallion” in name only. With the exception of Theatrical and several others, Nureyev’s offspring overwhelmingly distinguished themselves in Europe in group I championship-bearing races. It turned out to be quite a run for a stallion that many thought was a physically moderate individual.

The year 1987 also marked a turning point for Nureyev. He fractured his right hind leg just below his hock during breeding season. Walmac veterinarian Dr. J.D. Howard later told The Blood-Horse that the injured area “was just like a swivel. It just flopped. I thought, ‘There’s no way.’ ”

Nureyev underwent surgery in which four screws were inserted and he was outfitted with a cast. His chances for survival were pegged at 10%, but that was before additional problems surfaced – screws broke off, discomfort in the injured areas, respiratory infection and fears of colitis. Through a most unusual and almost cruel method – using the stallions disdain for people to pull him through.

The handlers and his vet noticed the horse beginning to lose his will to live, describing the great stallion as developing dull eyes and depression. The stallion was known to be aggressive, and he had not vaguely tried to give his grooms a hard time.

It got to the extent where the vet called a meeting with everyone concerned and asked what they could do to get the stallion to regain his vigour. One of his grooms described how Nureyev detested people and they came up with a solution that they could only describe as heartbreaking. Every time they walked up to Nureyev, they would do something to irritate him to try and provoke a response. The vet described how they would approach Nureyev and smack him. It took its toll on the team dealing with Nureyev, at having to do this to a horse in so much discomfort and pain.

But the slaps evoked a positive response – Nureyev began by just wrinkling his nostrils back. The next time they noticed his ears would flinch back. They continued this on a daily basis until he attempted to nip one of them – and began to notice that Nureyev had changed his stature and was waiting to ‘get at’ someone, and the sparkle in his eye had returned. The vet believes that had they not pursued this unsavoury approach, Nureyev would have given up hope and been lost to the world. Doing everything possible, Howard and his team managed to save Nureyev, and the horse was able to stand the following year’s breeding season. 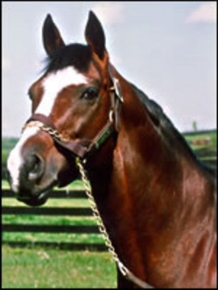 Nureyev’s champions include English Horse of the Year Zilzal, Sonic Lady, Fasliyev, Soviet Star, and Stately Don, who won the Secretariat Stakes (gr. IT) and a division of the Hollywood Derby (gr. IT) in the U.S. One of Nureyev’s sons, Robin des Bois, is the sire of Walmac stallion Gentlemen.

Nureyev died at the age of 24 on October 29, 2001. He is buried at Walmac International in Lexington, Kentucky.