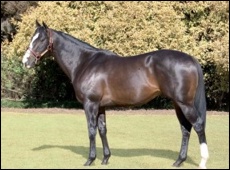 KZN Breeders Award Winner 2011 for Stallion Of The Year

Mogok (named after a city in Burma) has proved himself to be a consistent stallion, and with his regal pedigree its not surprising. By Storm Cat out of Coup de Folie by Halo, he is the last foal out of champion race and broodmare Coup de Folie, and a half-brother to Champion stallion Machiavellian, Coup de Genie and Exit To Nowhere.

His third dam is Natalma, the dam of Northern Dancer, and the granddam of Danehill, as well as being related to Sires Orpen and Jules. Mogok is unraced and arrived from the States at the Scott Brothers Highdown Stud in 2003.

In his first crop of foals he produced Island Retreat, a 5 time winner which included a win in the Dahlia Plate (Listed) over 1200 metres, as well as Ballito Boy who was later exported to Mauritius. Ballito Boy had 2 wins and 5 places including a third in the Byerley Turk (Grade 3) over 1400 metres. There was also Coverley a 4 winner, who ran second in both the Dahlia Plate (Listed) over 1200 metres and the Champion Juvenile Cup (Grade 3) over 1400 metres. Two of Mogok’s progeny out of Foveros mares placed in Graded races in his first crop. The first was Sahara, and besides her 4 wins she placed in second in the Umzimkhulu Stakes (Grade 3) over 1400 metres, The KZN Fillies Guineas (Grade 2) over 1600 metres and the Flamboyant Stakes (Grade 3) over 1600 metres. The second was Sayadaw who besides winning 7 times, placed in 3 Listed races and ran a fourth in the Emerald Cup (Grade 2) this year. 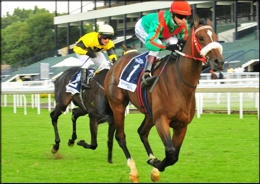 His next crop foals produced his best daughter to date, the Rathmor-bred Gypsy’s Warning. Gypsy’s Warning (out of Gypsy Queen by Royal Chalice) sold for R170 000 at the 2007 Emperors Palace National Yearling Sales, and to date she has had 5 wins in South Africa and 2 wins in USA.

Mogok’s other Graded winning progeny include Orbison, winner of the Grade 1 Champions Cup over 1800 metres and a third in the Vodacom Durban July (Grade 1) over 2200 metres as well as a placing in the Cup Trial (Grade 3) over 1800 metres.

His son The Apache out of a Dolpour mare is currently flying the flag for him – and was voted Champion Three Year Old Colt/Gelding at the 2011 Equus Awards. 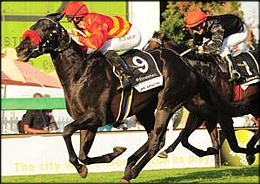 At sales to date, his top-priced colt has been 3 time winner (including a place in the Grade 3 Christmas Handicap over 1600 metres) The Law (Queen’s Right by Secret Prospector) who sold for R525 000 at the 2006 Emperor’s Palace National Two Year Old Sale. His top price filly was Black Current, out of good race-mare Taineberry. She sold for R350 000 at the 2008 Emperors Palace National Yearling Sale.