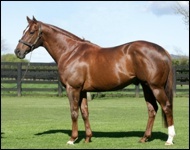 King’s Chapel who was recently unveiled at Bush Hill Stud’s stallion day will be standing his first season at stud in South Africa this year. By King of Kings(IRE) out of Lower Chapel by Sharpo(GB) – he had 10 wins in New Zealand and Australia over 1200-1600m, and was Horse of the Year at 3, a Champion 3 year old and Champion Sprinter/Miler in New Zealand with a Rated Timeform of 123.

He proved himself to be a sound, precocious and courageous individual, with plenty of speed.

King’s Chapel has enjoyed some success at stud in New Zealand with three crops to run in New Zealand to date. In his first crop of current four year olds he had the very smart Grade 2 winner King’s Ransom, and the stakes placed Star of Kings. He also has current stakes winning 3 year old Princess Emmy, and from only 5 runners to date, current leading 2 year old filly Lady Chapel. In his 4 year old crop he has achieved a rate of 50% winners to runners. 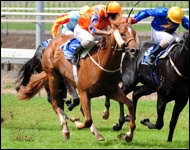 King’s Chapel’s progeny have proved his ability to breed precocious racehorses, with a speedy turn of foot like their sire. Pedigree guru Karel Miedema said in his analysis of King’s Chapel’s pedigree that his future in South Africa is a very exciting one. “King’s Chapel has a female line background that fits the bill, much more so than was the case in New Zealand where he started his stud career”.

King’s Chapel will have the ability to tap into the Fair Trial legacy in South Africa as have recent successes such as Harry Hotspur, Golden Thatch, Elliodor, Foveros and Western Winter, and as such mares with these elements in their pedigrees along with those with Gone West, Owen Tudor, Court Martial, Mummy’s Pet, Flower Bowl (Danehill, Caesour, Parade leader etc), Sharpen Up, Danzig/Green Desert, and Blushing Groom. This point emphasises how well suited he is to the mares we have in South Africa. 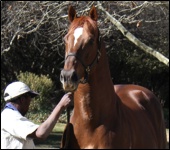 A handsome, beautifully conformed and balanced chestnut, he is imposing at 16.2 hands but has an exceptional temperament, which he demonstrated at the Stallion Day. He will add quality, substance, speed and scope to mares.

King’s Chapel is indeed a very exciting prospect for the KZN Breeders. His service fee is R15 000.